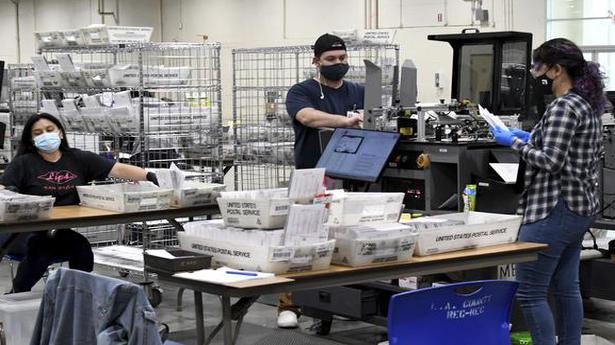 The country has a long history of making sure active duty military personnel can vote regardless of where they are stationed.

As the vote counting continues to determine the next United States President, attention is turning to the role that military and overseas absentee ballots will play in the final result. In razor-close states, it could be a significant one.

The country has a long history of making sure active duty military personnel can vote regardless of where they are stationed.

President Abraham Lincoln issued an order during the Civil War allowing troops to return home to cast a ballot if they could not vote absentee.

States set up remote voting at military encampments, and some allowed troops to designate a proxy who could vote on their behalf, the Congressional Research Service reports.

In 1942, Congress passed the first law that guaranteed the right to vote in federal elections to members of the Armed Forces who were away during wartime.

Fast forward to 2009, when Congress passed a bill requiring states to set up a system to transmit absentee ballots to military and civilian voters who were overseas during federal elections.

Why are military ballots still coming in?

Most military personnel far from home mail an absentee ballot, and those coming from overseas take, on average, about six days, according to a report from Count Every Hero, a nonpartisan group committed to ensuring service member’s right to vote is protected.

The group says 28 states and the District of Columbia accept and count ballots that arrive from overseas after election day.

Could military ballots influence the results in any of the states that have yet to be called?

In the razor-thin election in Georgia, the secretary of state’s office says as many as 8,900 ballots that have been transmitted to military and overseas voters could still arrive by close of business on Friday.

President Donald Trump on Thursday tweeted “Stop The Count!” as results showed him well ahead in various battleground states. Had the states complied, they would have prevented thousands of people serving in the military from having their vote counted.

Tropical cyclone Idai battered central Mozambique on March 15 killing at least 19 people and cutting off more than half a million people in one of the country’s largest cities Beira. State broadcaster Radio Mocambique, said “preliminary information points to 19 deaths and more than 70 injured in Sofala province as a result of cyclone […]

Hong Kong Police used water cannons for the first time and at least one officer fired his sidearm during pitched battles with protesters on August 25, one of the most violent nights in three months of pro-democracy rallies that have rocked the city. An afternoon rally in the district of Tsuen Wan spiralled into violent […]