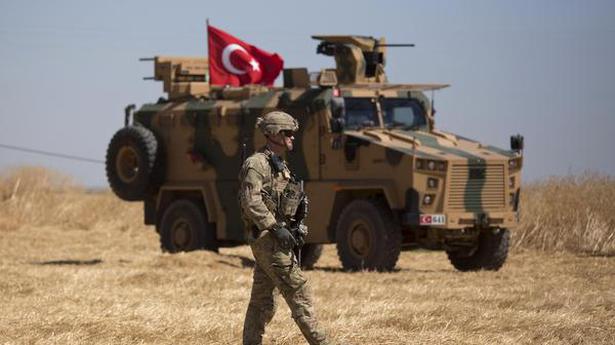 Syria’s Kurds accused the U.S. of turning its back on its allies and risking gains made in the fight against the Islamic State group as American troops began pulling back on Monday from positions in northeastern Syria ahead of an expected Turkish assault.

Syrian Kurdish fighters warned that Washington’s abrupt decision to stand aside, announced by the White House late on Sunday, will overturn years of achievements in the battle against IS militants. In a strongly-worded statement, they accused Washington of failing to abide by its commitments to its key allies.

There was no immediate confirmation from the White House of U.S. troops clearing positions in areas in northern Syria.

Turkish President Recep Tayyip Erdogan, however, also said American troops have started pulling back, and a video posted by a Kurdish news agency showed a convoy of American armored vehicles apparently heading away from the border area of Tal Abyad.

Mr. Erdogan spoke hours after the White House said U.S. forces in northeastern Syria will move aside and clear the way for an expected Turkish assault raising concerns about the fate of Kurdish fighters who fought alongside American forces in the yearslong battle to defeat the Islamic State group.

“Following our conversation last night (with Trump), the withdrawal has started as expressed by the President,” the Turkish leader said.

Mr. Erdogan did not elaborate on the planned Turkish incursion but said Turkey was determined to halt what it perceives as threats from the Syrian Kurdish fighters.

The White House, in a statement that was silent on the fate of Kurds, said U.S. troops “will not support or be involved in the operation” and “will no longer be in the immediate area,” in northern Syria.

There are about 1,000 U.S. troops in northern Syria, and a senior U.S. official said they will pull back from the area and potentially depart the country entirely, should widespread fighting break out between Turkish and Kurdish forces.

The White House statement on Sunday also said Turkey will take custody of foreign fighters captured in the U.S.-led campaign against IS who have been held by the Kurdish forces.

The Kurds have custody of thousands of captured Islamic State militants. They include about 2,500 highly dangerous foreign fighters from Europe and elsewhere their native countries have been reluctant to take them back and about 10,000 captured fighters from Syria and Iraq.

Kurdish officials have expressed concerns of a possible breakout by IS prisoners in case of fighting in the area.

Asked about the White House comments, Mr. Erdogan said that both Turkey and the U.S. were working separately to see “what steps can be taken” so that foreign fighters in prison can be repatriated.

“This is being worked on,” he said.

Mr. Erdogan has threatened for months to launch the military operation across the border. He views the Syria Kurdish forces as terrorists and a threat to his country as Ankara has struggled with a Kurdish insurgency within Turkey.

In the U.S., Republicans and Democrats have warned that allowing the Turkish attack could lead to a massacre of the Kurds and send a troubling message to American allies across the globe.

The Syrian Democratic Forces, as the Kurdish-led force is known, said the American pullout began first from areas along the Syria-Turkey border. The Syrian Kurdish Hawar news agency and the Britain-based Syrian Observatory for Human Rights also say American troops were evacuating positions near the towns of Ras al-Ayn and Tal Abyad on Monday.

“The American forces did not abide by their commitments and withdrew their forces along the border with Turkey,” the SDF said in its statement. “The Turkish military operation in northern and eastern Syria will have a huge negative effect on our war against IS,” it added.

Mustafa Bali, the SDF spokesman, tweeted that his group is not expecting the U.S. to protect northeastern Syria. “But people here are owed an explanation regarding the security mechanism deal and destruction of fortifications,” he said.

In an agreement between Ankara and Washington, joint U.S and Turkish aerial and ground patrols had started in a security zone that covers over 125 kilometers (78 miles) along the Turkey-Syria border between the towns of Tal Abyad and Ras al-Ayn. The SDF had removed fortification from the areas, considered a threat by Turkey, and withdrawn with heavy weapons.

But Turkey and the U.S. have disagreed over the depth of the zone, with Ankara seeking to also have its troops monitor a stretch of territory between 30 and 40 kilometers deep (19 to 25 miles). Mr. Erdogan has continued to threaten an attack.

The Kurdish-led fighters have been the main U.S.-backed force in Syria in the fight against IS and in March, the group captured the last sliver of land held by the extremists, marking the end of the so-called caliphate that was declared by IS’s leader Abu Bakr al-Baghdadi in 2014.

“We will not hesitate for a moment in defending our people” against Turkish troops, the Syrian Kurdish force said, adding that it has lost 11,000 fighters in the war against IS in Syria.

It said IS sleeper cells are already plotting to break free some 12,000 militants detained by Syrian Kurdish fighters in northeastern Syria.

The Kurdish fighters also control the al-Hol camp, home to more than 70,000 people, including at least 9,000 foreigners, mostly wives and children of IS fighters.

Turkish Foreign Minister Mevlut Cavusoglu tweeted that Ankara is determined to ensure the survival and security of Turkey “by clearing the region from terrorists. We will contribute to peace, peace and stability in Syria.”

People in Hong Kong thronged beaches, ferries and outlying islands on Sunday, many of them violating a ban on gatherings of more than four people aimed at containing the spread of the new coronavirus. Also | Interactive graphic tracking global spread of coronavirus – WHO Clear blue skies lured people to popular areas across the […]

Sri Lanka’s suspended police chief has petitioned the Supreme Court, accusing President Maithripala Sirisena of failing to prevent the Easter bombings that killed 258 people. In a 20-page complaint, Inspector-General Pujith Jayasundara disclosed serious communication gaps between intelligence agencies and security arms of the government, all which fall under Mr. Sirisena. Jayasundara’s petition In the […]