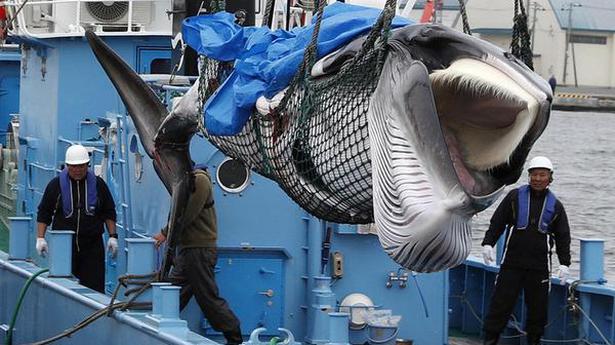 Japan began its first commercial whale hunts in more than three decades on Monday, brushing aside outrage over its resumption of a practice that conservationists call cruel and outdated.

Five vessels from whaling communities left port in northern Japan’s Kushiro and by afternoon, a first whale had been caught.

The country’s Fisheries Agency said it had set a cap for a total catch of 227 whales through the season until late December.

The hunts come after Japan’s withdrawal from the International Whaling Commission, a move slammed by anti-whaling activists but welcomed by Japanese whaling communities.

Whaling has long proved a diplomatic flashpoint for Tokyo, which says the practice is a Japanese tradition that should not be subject to international interference.

IS claims it executed 11 Christians in Nigeria

Jihadists aligned to the Islamic State group have released a video claiming to show the execution of 11 Christians in restive northeast Nigeria. The footage posted online late on Thursday by IS-linked propaganda arm Amaq showed 11 blindfolded men being shot and stabbed by jihadists from the Islamic State West African Province (ISWAP) at an […]

A defiant British Prime Minister Boris Johnson said on Saturday that he would resist attempts to delay Britain’s departure from the European Union (EU) beyond the end of the month, after parliament postponed a decision on whether to back his Brexit deal and ordered the government to ask the EU for more time. Boris Johnson […]

Thousands rallied in Paris on Saturday to seek an end to gender violence and femicide in a country where at least 116 women have been killed by current or former partners this year, sparking national outrage. The march began near the French capital’s main opera house, with several protesters holding up placards bearing the image […]