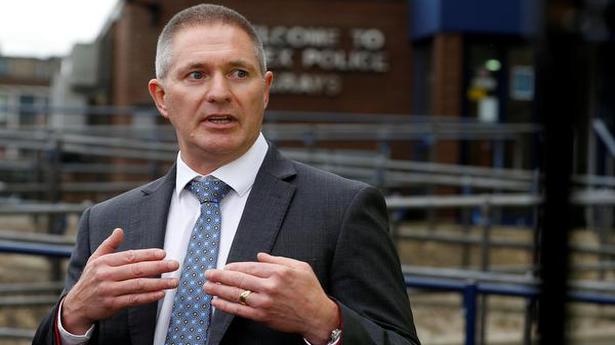 Police have taken forensic samples from people in central Vietnam who believe their family members may be among the 39 victims found dead in a container truck in England last week.

Up to 24 Vietnamese families had reported their missing family members to local authorities as of Sunday afternoon, the VNExpress news website reported.

Police took hair, fingernail and other forensic samples from the family members in Nghe An province to try to help identify the suspected trafficking victims who were found Wednesday in the vehicle container in an industrial park in southeastern England.

Thirteen people in Nghe An’s Yen Thanh district have been reported missing, with relatives fearing they were on the truck.

At their home in the district’s Tho Thanh village, the mother and a brother of Vo Ngoc Nam were awaiting news from the U.K. after not hearing from him for a week.

“We suspect that he was in the container in which people died. We don’t know what’s going on, but we think it’s true,” Nam’s older brother Vo Ngoc Chuyen said.

During the Mass, the priest, the Rev. Nguyen Duc Vinh, encouraged people to keep up their hopes.

U.K. police said Saturday that all 39 victims were out of the truck and in a mortuary awaiting autopsies. But they said the victims have not been identified and very few documents were found with the bodies.

Meanwhile, British police released three people on bail Sunday after questioning them in the deaths.

A 38-year-old man, a 38-year-old woman both from the northern English town of Warrington and a 46-year-old man from Northern Ireland were questioned on suspicion of manslaughter and conspiracy to traffic people.

Essex Police on Saturday charged the driver of the truck, 25-year-old Maurice Robinson of Northern Ireland, with 39 counts of manslaughter, conspiracy to traffic people, conspiracy to assist unlawful immigration and money laundering. He is to appear in court Monday.

Irish police said another man was arrested Saturday in connection with the case.

British police said their investigation includes over 500 exhibits, including cellphones that have to be downloaded to help identify the victims.

“We are working hard to understand how the 39 victims of this tragic incident have died and to identify all those involved,” said Detective Chief Inspector Martin Pasmore. “We remain open-minded as to nationalities of those who have died. We are asking anyone who may have information that may assist us in identification to come forward to us.”

India asked to provide list of illegal Bangladeshis, if any, on its soil: FM Momen

Bangladesh Foreign Minister AK Abdul Momen on Sunday said his country has requested India to provide a list of any Bangladesh nationals living illegally in the country and it will allow them to return. Responding to a question on India’s National Register of Citizenship (NRC), Momen, who cancelled his visit to India on Thursday citing […]