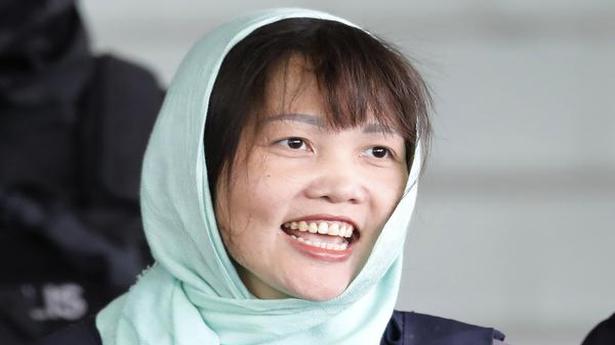 The Vietnamese woman who was tried for the killing of the estranged half brother of North Korea’s leader was released Friday from a Malaysian prison and due to fly back to Hanoi later in the day, her lawyer and an embassy translator said.

Doan Thi Huong’s release likely closes the case, since four North Koreans named as co-conspirators in the 2017 slaying are not in custody. Malaysian officials never officially accused North Korea and made it clear they didn’t want the trial politicised.

The two women were charged with colluding with the four North Koreans to murder Kim Jong Nam with VX nerve agent. The women smeared the substance on his face in the Kuala Lumpur International Airport on Feb. 13, 2017, and have said they thought they were taking part in a harmless prank for a TV show.

The High Court judge last August had found there was enough evidence to infer that Aisyah, Huong and the four North Koreans engaged in a “well-planned conspiracy” to kill Kim and had called on the two women to present their defense.

Lawyers for the women have said that they were pawns in a political assassination with clear links to the North Korean Embassy in Kuala Lumpur, and that the prosecution failed to show the women had any intention to kill. Intent to kill is crucial to a murder charge under Malaysian law.

“She was smiling from ear to ear. She is looking forward to return home to meet her family and friends,” he told .

After her sentencing last month, Huong told reporters at the court room that she wants to “sing and act” when she returns to Vietnam.

Kim Jong Nam was the eldest son in the current generation of North Korea’s ruling family. He had been living abroad for years but could have been seen as a threat to Kim Jong Un’s rule.

Now that the U.S. has signed a deal with the Taliban to eventually leave Afghanistan, it will soon be up to Afghans on both sides of the conflict to decide what peace will look like. The stakes are high. The big question for many — and particularly those who remember the religiously repressive Taliban rule […]

Sri Lanka Cricket on Wednesday said it received a warning from the Prime Minister’s office of a “terrorist threat” targeting the Sri Lankan cricket team during its upcoming Pakistan tour. Following the message, Sri Lanka Cricket has sought the government’s assistance to ‘reassess’ the security situation in Pakistan, ahead of the national team’s scheduled tour […]