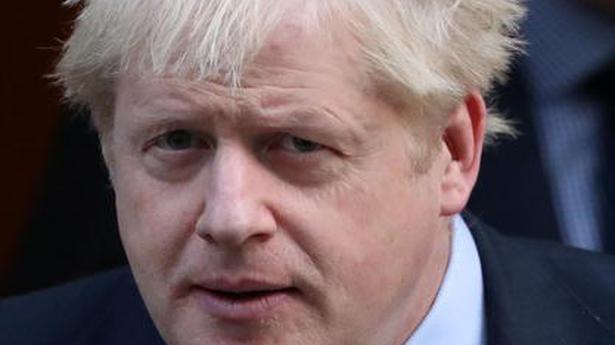 During the weekly Prime Minister’s Questions session in Parliament, Conservative Party MP Bob Blackman spoke of the violent protests by similar “pro-Pakistani” groups at the London mission during Indian Independence Day celebrations on August 15 and sought action to prevent a repeat of the violence.

“This is a police operational matter and the home secretary [Priti Patel] will be raising it with the police,” Mr. Johnson responded.

“We must all be clear in this House that violence and intimidation anywhere is wholly unacceptable in this country,” he said.

Mr. Blackman has been speaking out in favour of India since the decision to revoke Article 370 and withdrawing the special status of Jammu and Kashmir found echoes among Britain’s MPs.

The north London MP, who is also chair of the All Party Parliamentary Group (APPG) on British Hindus, has accused the Opposition Labour party of interfering in an internal matter of India.

On Wednesday in Parliament, he said: “In this House, we defence forever the right of peaceful protest. Yet on 15 August, pro-Pakistani organisations held violent protests outside the Indian High Commission.

“This Sunday, there is the threat of 10,000 people being brought to demonstrate outside the Indian High Commission on Deepavali , the most holy day for Hindus, Sikhs and Jains. What action is the government going to take to prevent violent protests this Sunday?”

Mr. Blackman has also written to London Mayor Sadiq Khan urging him to take steps to ensure the so-called “Free Kashmir” march on Sunday does not proceed.

“I am receiving vast amounts of correspondence from multiple diasporas highlighting concerns which stem from community safety perspectives plus the obviously confrontational date selected: the holy festival of Deepavali ,” he notes in his letter.

Last week, the London Mayor had issued a statement condemning the march and called on the groups to reconsider, while highlighting that the power to ban marches of this nature lies solely with the U.K. Home Secretary and not with the mayoral office.

“This march will only deepen divisions at a time when Londoners need to come together. That is why I am calling on those organising the march and all those considering taking part in it to think again and cancel their plans,” he said, stressing that his City Hall office would be working with Scotland Yard to ensure a “robust” policing plan was in place for such a march.

According to Metropolitan Police details on the permissions sought for the proposed march, an estimated 5,000-10,000 protesters plan to commence their march from Richmond Terrace near Downing Street and converge outside the Indian High Commission in London.

“This march finishes at the diplomatic mission — the very building which saw prolonged bouts of violence and thuggery in the summer and sadly the building remains scarred from when windows were smashed, objects repeatedly thrown and other ugly scenes,” notes Mr. Blackman in his letter to Mr. Khan, in reference to the violent clashes on August 15.

“After the horrific scenes in August the Hindu, Sikh, Jain and Buddhist diasporas are worried that authorities in the United Kingdom are not doing enough to protect them,” he adds.

The so-called “Free Kashmir” rally is being promoted across social media channels as an annual “Black Day” event to mark October 27, 1947, as the day when Indian troops allegedly entered the then princely kingdom of Kashmir.

The “President” of Pakistan-Occupied Kashmir, Sardar Masood Khan, and PoK “Prime Minister” Raja Muhammad Farooq Haider Khan are expected to participate in the march on Sunday.

Brazilian warplanes are dumping water on the burning forest in the Amazon state of Rondonia, responding to a global outcry over the destruction of the world’s largest tropical rainforest, according to a government video. As of Sunday, President Jair Bolsonaro had authorized military operations in seven states to combat raging fires in the Amazon, responding […]