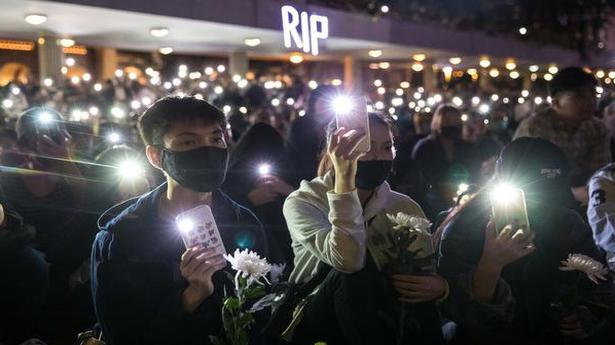 Pro-democracy protesters vandalised a train station in the central new town of Sha Tin and smashed up a restaurant perceived as being pro-Beijing, overturning banqueting tables and smashing glass panels, two weeks before district council elections in the Chinese-ruled city.

Violence spilled out onto the streets of Tuen Mun outside the “V city” mall, with running battles between riot police and protesters.

Now TV showed pictures of a circular, red welt and bruise on the upper arm of one of its reporters who said she had been hit by a tear gas canister in Tsuen Wan, to the west of the New Territories, where police fired tear gas late into the evening to clear the streets.

The rail station was closed in Sha Tin, amid scuffles between police and protesters young and old, on a day of planned shopping mall protests throughout the territory. Shopping districts across the harbour on the main island were quiet.

“Radical protesters have been gathering in multiple locations across the territories,” police said in a statement.

“They have been loitering in several malls and vandalising shops and facilities therein, neglecting the safety of members of the public.”

Protesters daubed graffiti and damaged shops at Festival Walk in Kowloon Tong and “stormed” shops in Tsuen Wan, police said. They made several arrests at Festival Walk where fistfights broke out and people hit each other with sticks.

The violence later spread to the Kowloon district of Mong Kok, one of the world’s most densely populated areas. Police used water cannon to try to clear the main artery of Nathan Road, which runs south to the harbour.

Protesters are angry about what they see as police brutality and meddling by Beijing in the former British colony’s freedoms, guaranteed by the “one country, two systems” formula in place since the territory returned to Chinese rule in 1997.

China denies interfering and has blamed Western countries for stirring up trouble.

Pakistani security forces raided a militant hideout in a residential compound in the northwestern city of Peshawar triggering a 15-hour shootout in which a police officer and at least five suspected terrorists were killed. Three other police officers were also injured in the operation, which has been continuing since Monday night against terrorists hiding in […]

A Pakistani court has dismissed a petition seeking deletion of terrorism charges against former military dictator Pervez Musharraf and transfer of his case from the Anti-Terrorism Court (ATC) to the sessions court, according to a media report. An Islamabad High Court division bench comprising Chief Justice Athar Minallah and Justice Miangul Hassan Aurangzeb resumed the […]

The US is currently undergoing a review of its assistance to Pakistan which is expected to be finalised soon, a top Trump administration official has told lawmakers. The relations between Pakistan and the US nosedived after US President Donald Trump last year accused Islamabad of giving nothing to Washington but “lies and deceit” and providing […]