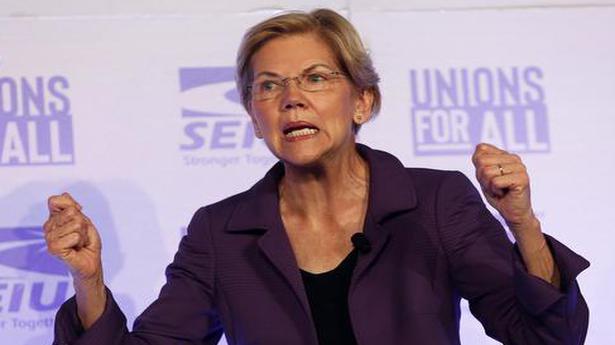 “Facebook changed their ads policy to allow politicians to run ads with known lies — explicitly turning the platform into a disinformation-for-profit machine. This week, we decided to see just how far it goes,” Ms. Warren tweeted on Saturday. “We intentionally made a Facebook ad with false claims.”

Facebook Inc’s policy has come under fire from another Democratic front-runner in the 2020 race. Former Vice-President Joe Biden blasted Facebook after it refused to take down a Trump campaign ad that the Biden campaign said contained false allegations.

The Trump ad claimed that Mr. Biden had promised Ukraine $1 billion if the country fired a prosecutor investigating a company linked to Biden’s son.

Imran vows to raise issue of Kashmir at global level

Prime Minister Imran Khan addressed a special session of the PoK legislative assembly on Wednesday, marking Pakistan’s Independence Day. Mr Khan said he would be the Ambassador of Kashmir at all international forums and raise his voice for hapless Kashmiris. Comparing the ideology of the Rashtriya Swayamsevak Sangh (RSS) to Nazism, Mr Khan spoke of […]

A massive explosion at a multi-story building rocked French capital Paris, which was caught on camera by witnesses and widely shared on social media. #BREAKING : Paris , France – Central Paris has been rocked by an explosion and fire in a residential building in the 19th arrondissement of the city. Video Credit : Mayespic.twitter.com/ODp3UIme12 […]

From Kenya on the east coast to Uganda and landlocked Rwanda a digital revolution, inspired by Chinese icons such as ecommerce giant Alibaba, is in the works. In Kenya’s capital Nairobi, the e-commerce ecosystem, powered by the Internet is beginning to take root. The Global Times, a tabloid from the stable of People’s Daily — […]