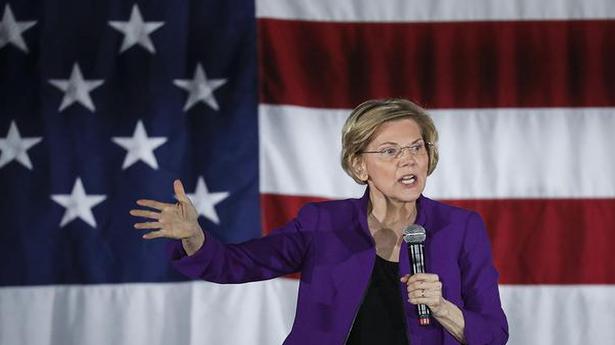 Senator Elizabeth Warren vowed on Friday to break up Amazon, Google and Facebook if elected U.S. President to promote competition in the technology sector.

Seeking to stand out in a crowded field, Ms. Warren said at a campaign event in Queens that it was time to challenge the increasing dominance of America’s biggest technology companies.

Amazon abruptly scrapped plans in February to build a major outpost in the neighbourhood that could have created 25,000 jobs, blaming opposition from local leaders.

In an event held not far from the proposed Amazon site, Ms. Warren said that big tech companies come into towns, cities and states and “bully everyone into doing what they want” and “roll right over” small businesses and start-ups that are a threat.

“Giants are not allowed to buy out the competition. The competition needs the opportunity to thrive and grow,” she said.

Earlier in the day, Ms. Warren said in a post on Medium that she would nominate regulators to unwind acquisitions such as Facebook’s deals for WhatsApp and Instagram, Amazon’s deals for Whole Foods and Zappos, and Google’s purchases of Waze, Nest and DoubleClick.

Ms. Warren also proposed legislation that would require tech companies like Google and Amazon that offer an online marketplace or exchange to refrain from competing on their own platform. This would, for example, forbid Amazon from selling on its Amazon Marketplace platform.

It is rare for the government to seek to undo a consummated deal. The most famous case in recent memory is the government’s effort to break up Microsoft. The Justice Department won a preliminary victory in 2000 but was reversed on appeal. The case settled with Microsoft intact. U.S. Congress held a series of hearings last year looking at the dominance of major tech companies and their role in displacing or swallowing up existing businesses, among other things.

Tech companies are some of the biggest political donors. Google spent $21 million to lobby in 2018 while Amazon spent $14.2 million and Facebook spent $12.62 million, according to their filings to U.S. Congress.

Angering a deep-pocketed industry could hurt Democrats, but that is not likely to be a big concern for Ms. Warren, who made her political mark and plenty of enemies by going after big banks after the 2007-09 financial crisis. In the Senate, Ms. Warren continues to be an outspoken critic of Wall Street and is a leader of her party’s progressive wing.

Kosovo’s Parliament was disbanded on Thursday, opening the way to the country’s President to set the date for an early general election. The 120-seat Parliament held an extraordinary session on Thursday, deciding by 89 votes in favour of disbanding the Parliament. There was one vote against and two people abstained. In July, Prime Minister Ramush […]

Singapore has suspended the use of Zoom for online education after hackers hijacked a lesson and showed obscene images to students. In what is known as “Zoombombing,” two hackers interrupted a geography lesson a day after Singapore closed schools on Wednesday as part of partial lockdown measures to curb local transmissions of COVID-19. Lessons have […]

In late November, Ayabe, a small city tucked away in the mountains north of Kyoto, became the unlikely setting for the coming together of a series of moments in history spanning the globe, from India, the Philippines, Singapore, and Japan to the United States. On November 24, Jarat Chopra, a descendant of the 19th-century Diwans […]