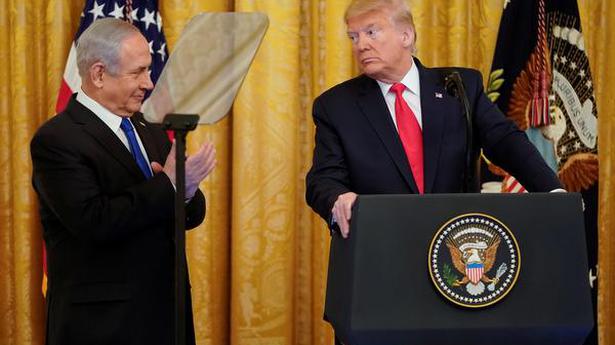 The Middle East peace plan unveiled by U.S. President Donald Trump on Tuesday seeks to give the Israelis what they have long wanted — an expansive state with Jerusalem as its “undivided capital” and tight security control over a future Palestinian state. With his plan, Mr. Trump is actually pushing to revive the stalled two-state talks between the Israelis and the Palestinians, but on his own terms. Israeli Prime Minister Benjamin Netanyahu, who had earlier spoken against the two-state solution, has accepted the Trump plan, while appearing beside the President in the White House. The Palestinians were absent.

The Middle East peace plan was spearheaded by President Trump’s son-in-law Jared Kushner with no consultation with Palestinian leaders. Palestinian President Mahmoud Abbas has rejected Trump’s peace plan. Violent protests broke out in and around Palestine following the announcement.

Trump warns China of consequences if found responsible for COVID-19

U.S. President Donald Trump has warned China of consequences if it was “knowingly responsible” for the spread of the novel coronavirus pandemic. Trump, who has expressed his disappointment over handling of the coronavirus disease by China, alleged non-transparency and initial non-cooperation from Beijing with Washington on this issue. “If they were knowingly responsible, then there […]

South Korea reported on Monday its first confirmed case of the new coronavirus that has broken out in China, South Korea’s Centers for Disease Control and Prevention (KCDC) said.   The patient is a 35-year-old Chinese woman who flew from Wuhan, China to Incheon international airport on Sunday. She was isolated upon entry into the […]

In the wake of the outbreak of an infection in China caused by a new strain of virus, the health ministry has sought from the Ministry of External Affairs details of those who have applied for Indian visa since December 31 so that they can be counselled. The MEA has also been requested to disseminate […]