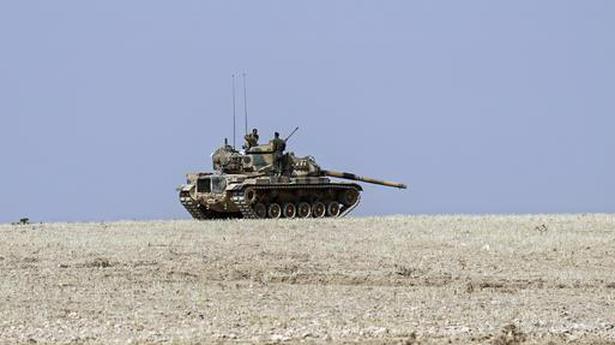 Turkey pounded Kurdish militia in northeast Syria for a second day on Thursday, forcing tens of thousands of people to flee and killing at least dozens of people in a cross-border assault on U.S. allies that has turned the Washington establishment against President Donald Trump.

This video shows the offensive against the Syrian Democratic Forces (SDF) led by Kurdish YPG militia, which began days after Mr. Trump pulled U.S. troops out of the way and following a phone call with Turkish President Tayyip Erdogan, opens one of the biggest new fronts in years in an eight-year-old civil war that has drawn in global powers.

The SDF have been the main allies of U.S. forces on the ground in the battle against Islamic State since 2014. They have been holding thousands of captured IS fighters in prisons and tens of thousands of their relatives in detention.

SDF forces were still in control of all prisons with Islamic State captives, a senior U.S. State Department official said in a briefing with reporters on Thursday.

The United States has received a high-level commitment from Turkey on taking responsibility for Islamic State captives but has not yet had detailed discussions, the official said.

Read more: Making a friend of the neighbour

Bangladesh will not accept two boats carrying hundreds of reportedly starving Rohingya refugees, the country’s Foreign Minister said on Thursday as calls grew to rescue the Muslim outcasts. Also read: Why no protection for persecuted Rohingya Muslims, ask settlers The new controversy over stranded Rohingya blew up just a week after dozens starved to death […]

The United States moved on Thursday to halt the release of an Iranian supertanker detained in Gibraltar for breaching international sanctions on oil shipments, thwarting efforts by authorities in London and the British overseas territory to defuse tensions with Tehran. The Gibraltar government confirmed earlier media reports that the U.S. Justice Department seeks to extend […]

One U.S. soldier was killed in action in Afghanistan on Monday