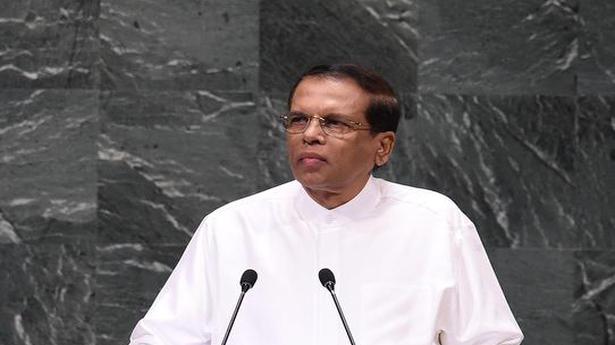 Sri Lankan President Maithripala Sirisena on Wednesday exposed the rift persisting within the government, saying he would ask the United Nations Human Rights Council to reconsider its 2015 resolution on the country, as he did not wish to “reopen old wounds”.

Hours after the President declared his position at an editors’ meeting on Wednesday morning — effectively going back on the pledges he made to the Tamil minority in 2015 — the Foreign Ministry said Sri Lanka would continue to demonstrate its commitment and determination towards “a steady and long-lasting reconciliation process through a co-sponsored resolution”.

It will seek an extension of the timeline of resolution 30/1 of October 01, 2015, “through a co-sponsored roll-over resolution at the ongoing 40th session of the UN Human Rights Council,” the Ministry said in a statement.

Going by the contradictory messages put out by the President and the Foreign Ministry, it appears that the fissures within the cohabitation government may have deepened since the island’s political crisis late last year.

Local media reported that the President will send a team comprising senior parliamentarians from his party, Sarath Amunugama and Mahinda Samarasinghe, and Northern Province Governor Suren Raghavan to Geneva to lobby the Council to allow Sri Lanka to take care of its own affairs.

However, The Hindu has learned that no other “official delegation” from Colombo will go to Geneva, as the Sri Lankan mission in Geneva has been tasked with airing the “official [Foreign Ministry] position” at the Council.

Even as President Sirisena’s move suggested resistance to any international oversight, the Foreign Ministry, in its statement, said “the entire mechanism and process of reconciliation is under the control of [the] Government of Sri Lanka”.

Meanwhile, making his Budget speech on Tuesday, Finance Minister Mangala Samaraweera announced a series of initiatives for the war-affected north and east, titled ‘Reconciliation through Economic Empowerment’. In addition to setting up a ‘Palmyra Fund’ of LKR 5,000 million to “fast-track development in the region”, the budget also provides for measures, including a monthly compensation for families of disappeared persons.

A decade after Sri Lanka’s civil war ended, the Tamil minority living in the north and east are awaiting answers to troubling war-time questions — particularly on the thousands of enforced disappearances reported during that time.

On the other hand, leaders in the southern polity defend the soldiers as “war heroes”, apparently shielding them from any accountability.

However, the Foreign Ministry said the allegations made against Sri Lanka for co-sponsoring of the rollover resolution was part of a campaign “to mislead the public and gain undue political advantage”.

It further stated that those who “shed crocodile tears on behalf of war heroes” had forgotten that Sri Lankan soldiers were engaged in peace keeping missions abroad only because the country co-sponsored the resolution.

Swedish climate activist Greta Thunberg on Tuesday refused to accept an environmental award, saying the climate movement needed people in power to start to “listen” to “science” and not awards. The young climate activist, who has rallied millions to her “Fridays for Future” movement, was honoured at a Stockholm ceremony held by the Nordic Council, […]