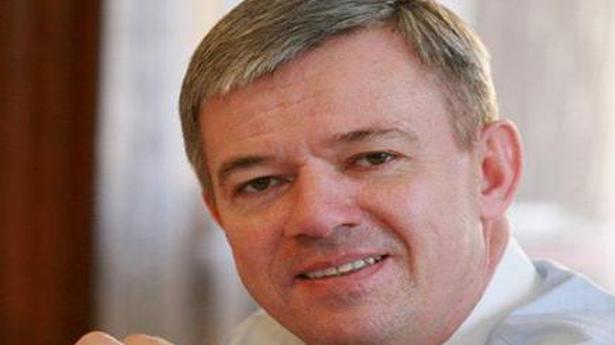 Czech Republic and India have strong bilateral, economic and defence ties and both countries want to elevate it to the next level, Czech Ambassador in New Delhi Milan Hovorka has said. In an interview with The Hindu, the envoy, who was in Chennai to open an honorary consulate of Czech Republic in the city, spoke of a host of issues related to Indo-Czech tries, from cooperation in international forums to trade and investment partnership.

You have just opened an honorary consulate in Chennai. Why did you pick Chennai?

This is our fourth honorary consulate. We do have one each in Mumbai, Kolkata and Bengaluru. The Chennai consulate with the jurisdiction for Tamil Nadu and Pondicherry is in line with the priorities of the Czech republic, which is to develop thriving relationship with India. We do it at the central government level and also at the regional level. And that’s why we want to establish an institutional presence in Chennai. Definitely, Tamil Nadu is one of the most dynamic States in India. It’s well-known for its large talent pool, strong industrial fundamentals, IT and knowledge hubs. These are all factors why we decided to have our presence here. We hope the consulate will become an important gateway for our businesses. Besides taking trade and investment relations forward, we would promote people-to-people contacts between Tamil Nadu and Pondicherry and Czech Republic.

Is there any major investment proposals in the pipeline for Tamil Nadu?

That’s the issue, you know. We don’t have too many investments here. However, people in Tamil Nadu are familiar with one of the prominent Czech industries — Skoda cars. We have a wide dealership network here. We want to have the kind of projects with the potential of snowball effect. It’s doable. Tamil Nadu is more that prepared for doing business. The honorary consul and his team will work to enhance existing opportunities. On the other side, we will facilitate business-to-business contact between local businesses and their Czech counterparts.

What you do think are the major thrust areas of bilateral cooperation between India and Czech Republic?

You know these two countries are not necessarily neighbours. But despite all the differences we may have — and in fact we have in terms of language, religion, experience — we do have a number issues in common. And these the are fundamentals on which we are developing a strong relationship. In 2017, we celebrated the 70th anniversary of the establishment of formal relations between our two great countries. Czechoslovakia was among the first countries to recognise independent India. We are like-minded countries on a number of international issues, including multilateralism. We both have been supporters of multilateralism. We definitely are in favour of multilateral solutions, and we strongly reject unilateral actions. We are like-minded on the issues related to the UN reform, we are united and we support India’s cause to become a member of the security council. Definitely, we would at the same time like to see the interests of small and medium countries to be reflected in this reform and also in the security council membership. We are one of the supporters of India’s case to become a full-fledged member of the Nuclear Suppliers Group. We are like-minded on the potential of the peaceful use of nuclear energy. We want to take our trade and investment relations to the next level on a contractual basis. These are the issues. Definitely we have a long history of industrial cooperation, which goes way beyond the 70-year-long journey. We have already proved our capacity to be a trustful partner to help India build its industrial capacity, especially in the power generation and defence sectors. We have advanced the idea of elevating our bilateral partnership. We have agreed to start discussions at the end of which we could come to an agreement that we can elevate it to the level of strategic partnership.

Are there any specific plans drawn for elevating ties to strategic partnership?

I have already alluded to them. We do have high level contacts at various levels. We want to have a productive and constructive dialogue on bilateral and regional levels. We would like to use strategic partnership to promote bilateral, economic and trade relations. We believe it would help us promote people to people contacts. The potential is enormous.

You referred to the defence sector as a potential area of cooperation between the two countries. Is there any major investments

We have a long lasting history of defence cooperation. You may know Tatra trucks, which has been providing high quality service to Indian armed forces for decades. But this is not the only area in which we have been working together. We do have different kind of surveillance systems. We do have first class radars. Most of Indian airports use radars originating from the Czech Republic. Our producers are now ties with Indian partners. Recently Bengaluru hosted Aero India show. During the show, one of the Czech companies, PBS, signed a contract and opened an Indian office, and the objective is to produce aircraft engines here in India. Czech Republic is one of the few countries which have the capacity to design and produce aircraft of different types, including supersonics. So plenty of opportunities are there.

We discussed the positive sides of the ties. What do you think are the challenges in elevating ties between the two countries?

I don’t know whether I would call them challenges. Instead, probably, I would call them opportunities. And I believe we both can gain if we intensify our efforts at all levels. If we are ready to invest time and visit each other to better understand what Czech and India can do together in trade, investment, cultural exchanges, students exchanges, people to people contact, we can gain. Bilateral trade is now $1.6 billion out of which $870 million is imports from India. So we provide very good business and investment opportunities for Indians and they are doing extremely well. We do have a number of companies operating in the Czech Republic. Tamil Nadu is one of the major automotive hubs. We are a major European hub. We produce 1.2 million cars. We also import cars which are produced here in Tamil Nadu. We drink Indian tea, we drink Indian coffee. Indian investors are there in textile, pharma and steel in Czech Republic. In Bengaluru, we have set up a business incubator. The idea is to create platform for Czech SMEs which are not able to establish a platform in Karnataka. We want to take it further, to build something called Czech Industrial Park, creating infrastructure, creating facilities for Czech companies and their Indian partners to innovate and produce together.

Sri Lankan President Maithripala Sirisena on Wednesday exposed the rift persisting within the government, saying he would ask the United Nations Human Rights Council to reconsider its 2015 resolution on the country, as he did not wish to “reopen old wounds”. Hours after the President declared his position at an editors’ meeting on Wednesday morning […]

The killing fields of Bolsonaro’s Brazil

On a breezy Sunday morning in April this year, a white sedan being driven by Evaldo dos Santos, 47, slowed down as it approached an Army barricade in the northern part of Rio de Janeiro. Then, without any warning or provocation, the soldiers began to fire at the car, riddling it with 80 shots out […]

Two protesters were killed and over a dozen wounded in central Baghdad on Friday in renewed violence between anti-government demonstrators and Iraqi security forces, activists and officials said. The deaths follow weeks of calm. Riot police fired tear gas and hurled sound bombs to disperse crowds on the strategic Sinak Bridge after protesters attempted to […]