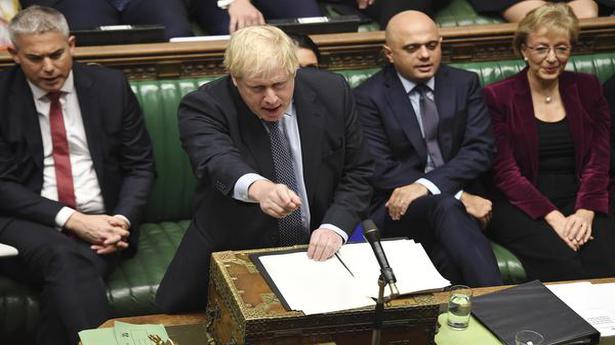 British MPs have again ruptured the Brexit process by withholding their support for Prime Minister Boris Johnson’s new divorce deal with the EU.

The House of Commons voted for an amendment making approval for the text conditional on Parliament passing legislation to ratify the treaty before Britain leaves the EU. The failure to clearly back the deal triggered a law forcing Mr. Johnson to ask EU leaders to delay Brexit for a third time

MPs passed the amendment claiming they fear the risk of a potentially disastrous “no deal” exit by accident on October 31. But the vote does not kill the deal, and holds out the possibility Britain could still leave the EU in an orderly fashion on October 31.

Legislation passed last month states that unless MPs have backed a Brexit deal by the end of October 19, Mr. Johnson must write to the EU asking for Brexit to be postponed for three months to January 2020. If the EU offers a different date, Mr. Johnson must accept it unless he can persuade the House of Commons to vote against the plan.

But the Prime Minister reiterated his stance on Saturday that he would not seek a third delay, insisting the law does not compel him to do so.

That raises the possibility he might refuse to send the letter to EU leaders — setting up a potential clash in the courts.

However, Brexit Minister Steve Barclay has insisted the government will obey the law, leading analysts to argue Mr. Johnson will likely capitulate and reluctantly ask for the postponement.

Even if Mr. Johnson has asked the EU for a deal, and it agrees, he could still get Britain out on October 31 by swiftly ratifying his deal.

The government is expected to put forward the legislation required to do this on Monday, with the first vote likely on Tuesday.

Several of those who backed Saturday’s amendment say they would support Mr. Johnson’s Bill, once the threat of a “no deal” is removed.

Eurosceptic members of his Conservative party have also pledged to back the legislation.

However, there is a risk the Bill is hijacked by anti-Brexit MPs, for example to make approval subject to a new EU referendum. Timing could also be an issue. Legislation of this type would normally take months but the MPs of both Houses would have less than two weeks.

The default legal position is that Britain leaves the EU on October 31 unless it asks to delay, and the other 27 member states agree.

Business and markets across Europe fear the shock of a sudden Brexit that even the government’s own assessment says would cause economic damage.

After signing off on the Brexit deal this week at a summit in Brussels, EU leaders warned they did not want to see Brexit delayed again.

But confronted with a formal request — and the threat of a possible no-deal departure — they would be expected to agree.

Mr. Johnson has already tried twice to get an early general election, to allow him to win back a majority in Parliament.

But he needs the support of the main opposition Labour party to call one.

Labour says it will back an election when the threat of a “no-deal” Brexit is off the table.

Labour says any deal should be subject to a new referendum, and has promised to call one if it takes office.

Some MPs may try to force the issue during the passage of the Brexit deal legislation, although it is far from clear that they have the numbers to succeed.

Four Sri Lankan Muslim Ministers, who resigned following the Easter Sunday bombings that killed 258 people, have rejoined the government after investigators found no link in their alleged involvement with a local islamist extremist group. Two senior Muslim leaders Rauff Hakeem — the leader of the Sri Lanka Muslim Congress (SLMC) and Rishad Badiyudeen, the […]

Thousands of students, activists and representatives from several Indian diaspora and human rights organisations gathered opposite Downing Street in London to protest against India’s new Citizenship Amendment Act (CAA). The rally, organised by student groups and Indian outfits in the UK, marched around a mile down the streets to gather outside the Indian High Commission […]

U.S.-based global tech giants, including IBM, Amazon, Google and Microsoft, have partnered with the White House to “unleash the power of American supercomputing resources” for combating the novel coronavirus, President Donald Trump has said. From volunteering to manufacturing masks and ventilators to ramping up production of essential medical supplies and general items, the country’s private […]