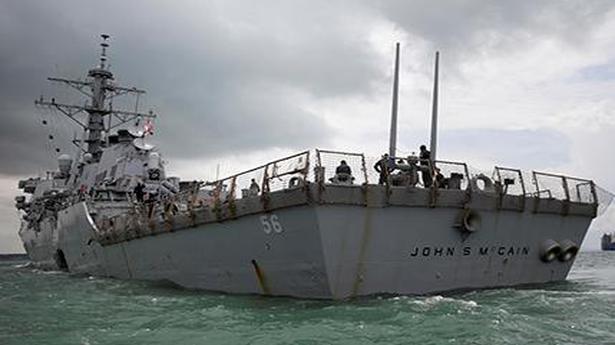 U.S. President Donald Trump said on Wednesday that he was unaware of any effort to move the USS John S. McCain that was stationed near the site of his recent speech in Japan.

A U.S. official confirmed to Reuters that an initial request had been made to keep the John McCain out of sight during Mr. Trump’s speech but was scrapped by senior Navy officials.

The Wall Street Journal, which first reported the news, said the White House wanted the Navy to move the ship, named for the late Arizona Senator, “out of sight.”

The email to Navy and Air Force officials had a number of directives, including: one telling officials that “USS John McCain needs to be out of sight”.

Speaking with reporters en route to Singapore, acting U.S. Defense Secretary Patrick Shanahan said he had not approved any movement of the ship, but would ask his Chief of Staff to look into the details of what happened.

Inslee: Forget impeaching Trump. Voting him out is better.

Democratic presidential candidate Jay Inslee wants his party to scrap any thoughts of impeaching President Donald Trump and instead focus on voting him out of office. “We should have a dramatic, engaged, concerted, energetic and successful effort in November 2020 to make Donald Trump a blip in history,” Washington Gov. Jay Inslee said during a […]

Thousands of mourners gathered Saturday for a funeral procession through Baghdad for Iran’s top general and militant leaders killed in a U.S. airstrike. Gen. Qassem Soleimani, the head of Iran’s elite Quds force and mastermind of its regional security strategy, was killed in an airstrike early Friday near the Iraqi capital’s international airport. Many of […]

U.S. President Donald Trump has in a telephonic conversation urged Pakistani Prime Minister Imran Khan to “moderate rhetoric” with India over the situation in Jammu and Kashmir in an effort to reduce tensions. Trump’s call with Khan — the second in less than a week — came soon after a 30-minute conversation with Prime Minister […]