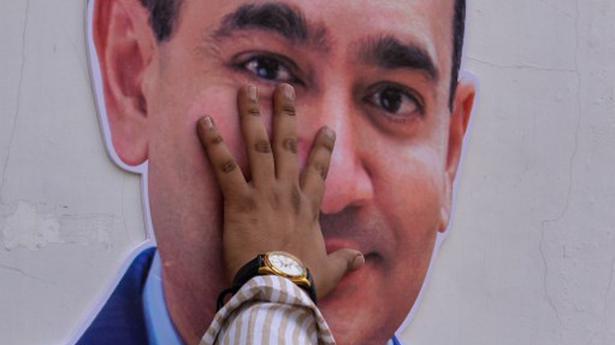 The story so far: The long-awaited push by India to extradite Nirav Modi — the key accused in the Punjab National Bank fraud case — kicked off last week. Things didn’t go quite according to plan: Mr. Modi’s legal team had been in talks with the Metropolitan Police’s extradition unit and he was to hand himself over as part of a voluntary process this week. However, he was arrested last Tuesday after an Indian-origin clerk at a bank in central London recognised him and alerted the police, pushing things forward unexpectedly.

What happened to his bail plea?

He has twice been denied bail following hearings at Westminster Magistrates Court — most recently on Friday. This came despite assurances such as £1 million in security, an offer to wear an electronic tag and his defence team’s insistence that he saw London as a “haven” which he had no intention of fleeing. Chief Magistrate Emma Arbuthnot said there was a risk he would fail to surrender to the court and pointed to the large amount involved in the alleged fraud ($1-2 billion), as well as his attempts to move elsewhere — including by seeking citizenship in the South Pacific island of Vanuatu. She acknowledged that there were “inconsistencies” in some of the witness accounts against him but did not believe these were enough grounds to override cause for concern.

Mr. Modi will remain in prison — for now HM Wandsworth, one of Western Europe’s biggest prisons. He will appear through videolink for a brief technical hearing on April 26. The prosecution has until May 24 to present the papers, which will be followed by further time for the defence to present theirs. Mr. Modi can appeal the bail ruling to a higher court, parallel to the extradition proceedings. Moving to the main extradition trial at Westminster Magistrates Court could take months: with Vijay Mallya, the case management hearings began in June 2017 after his arrest in April, while the trial began in December.

How is the case similar to Mallya’s?

“I’m having a sense of déjà vu,” quipped Ms. Arbuthnot on Friday. There were certainly parallels: a high-profile, high-net-worth individual — associated with high-living and expensive tastes — wanted by India on charges of fraud and attempting to conceal the proceeds. There were also teams from the Enforcement Directorate and the Central Bureau of Investigation present at both proceedings, while Modi’s barrister, Clare Montgomery, and his solicitor, Anand Doobay, also represented Mr. Mallya.

Are there lessons from the Mallya case?

The Mallya case had been cast as a watershed moment for the way in which Indian authorities worked with Britain on extradition. That case was meant to have honed India’s understanding of the system and the standards, documentation and evidence that were expected in such cases. However, that it still needs improvements became quickly evident on Friday as the judge and defence lawyer made sharply worded criticism of the state of the papers — in particular the numbering and indexing — with the judge insisting on the presentation of “clean” papers henceforth.

What are the differences?

While Mr. Mallya maintained a high profile before the start of proceedings here and owned property in the U.K., the prosecution positioned Mr. Modi as being uncooperative with authorities. They allege that he had attempted to bribe and threatened to kill a witness and applied pressure on others, and contested the defence’s suggestion that he had never left the country since the scandal broke, pointing to a trip to the U.S. they said he made this February. The judge herself described the allegations of witness intimidation and attempts to destroy evidence (including a phone and a server) as “very unusual” in a fraud case.

How will the case proceed?

Barrister Toby Cadman, acting for the Crown Prosecution Service, who is representing India, told the court that Mr. Modi was wanted in India on charges of fraud and money laundering. Under dual criminality requirements in the U.K.-India extradition treaty, an extradition offence must be punishable by at least 1 year in prison under both countries’ legal systems. However, the treaty states that extradition may be refused if the offence is of a “political character” and this could come into play and be invoked by the defence team as it was in the Mallya case. As the defence’s bail arguments also made plain, they are likely to point to the inconsistencies in witness accounts and challenge the idea of a systematic and deliberate attempt to defraud the bank through letters of undertaking.

Pakistan on Thursday said it has reported 742 new cases of COVID-19 and 15 more deaths in the last 24 hours, taking the total number of deadly coronavirus infections to 10,513 with 224 deaths in the country. Also read | Pakistan’s fight against coronavirus The Ministry of National Health Services said 15 more patients died […]

Hong Kong was bracing for a weekend of unrest with pro-democracy protests likely to mount in the China-ruled territory ahead of the 70th anniversary of the founding of the People’s Republic on Tuesday. Thousands of people are expected to rally in the city centre on Saturday evening after authorities granted a permit for a gathering […]

“We are pleased to announce that Dr Vivek Lall will assume the position of Chief Executive at General Atomics Global Corporation, effective immediately,” GA said in a statement emailed to PTI on Sunday. Source: thehindu.com Related