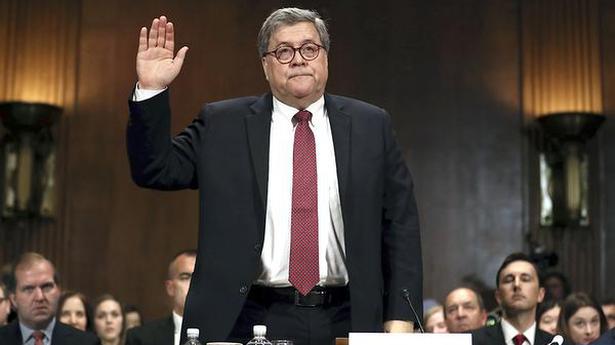 Under pressure from Senate Democrats, Attorney-General William Barr defended his handling of Special Counsel Robert Mueller’s report on Russia’s role in the 2016 U.S. election, saying Mr. Mueller was given broad authority to conduct his investigation.

“As you see, Bob Mueller was allowed to complete his work as he saw fit,” Mr. Barr told a Senate Judiciary Committee hearing, adding that Mr. Mueller had the time, money and resources needed to conduct his 22-month inquiry.

Democrats have accused Mr. Barr, the top U.S. law enforcement official, of trying to protect President Donald Trump. Mr. Barr defended the way he dealt with the report’s release and redactions made by the Justice Department removing parts of the document to protect sensitive information. Mr. Barr also told the panel he believed Russia and other countries were still a threat to future U.S. elections.

Mr. Barr noted that he had told the committee during his confirmation hearing before becoming Attorney-General that he would make as much of the report available to the public and Congress as possible under the law. “This has been done,” Mr. Barr said.

At the outset of the hearing, Judiciary Committee Chairman Lindsey Graham, a Republican, said the report showed that Congress should focus on protecting the coming 2020 election, in which Mr. Trump is seeking re-election, from foreign interference after Russian meddling in the 2016 race.

Democrats on the Senate-led panel began to grill Mr. Barr in his first appearance before lawmakers since he released the 448-page report on April 18. “Contrary to declarations of total and complete exoneration, the Special Counsel’s report contained substantial evidence of misconduct,” said Senator Dianne Feinstein, the committee’s top Democrat.

It marks first time a member of the Trump administration is testifying about the contents of Mr. Mueller’s report.

Also on Wednesday, the Democratic chairman of the U.S. House Judiciary Committee said an agreement had been reached to have Mr. Mueller testify to Congress on the probe. Representative Jerry Nadler told reporters the agreement was for Mr. Mueller to testify sometime in May, but that a specific date had yet to be agreed upon. Mr. Barr has said that he will not block Mueller from testifying.

Mr. Mueller complained that Mr. Barr did not “fully capture the context, nature and substance of this Office’s work” shortly after Mr. Barr released a four-page letter in March stating the inquiry’s main conclusions. The letter, first reported by The Washington Post, was released on Wednesday. Democrats are now debating whether the report serves as a suitable basis to begin impeachment proceedings in Congress to try to remove Mr. Trump from office.

Israel Prime Minister Benjamin Netanyahu on Thursday called on his main rival, former general Benny Gantz, to join him in a broad, governing coalition after Israel’s election ended with no clear winner. A spokeswoman for Mr. Gantz, leader of the centrist Blue and White party, had no immediate response to the surprise offer from Mr. […]

U.S. President Donald Trump is being formally charged with abuse of power and obstruction of Congress in the impeachment inquiry into his dealings with Ukraine, leading House Democrats announced on Tuesday. The House Judiciary Committee will vote on the articles later this week, before recommending them to the full House, the committee’s chairman Jerrold Nadler […]

The United States has urged Yemen’s Huthi rebels to drop charges targeting the Baha’i community, which said that 24 believers of the faith will face a new trial session Tuesday. Sam Brownback, the U.S. ambassador-at-large for international religious freedom, voiced concern at reports that a court in Yemen’s Huthi-controlled capital Sanaa is again summoning the […]