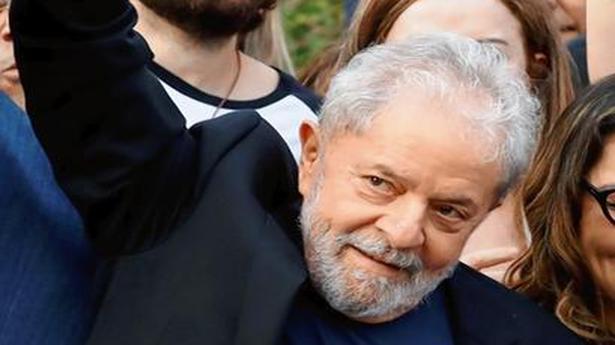 Around 6 p.m. on Friday, a smiling Luiz Inácio Lula da Silva walked out of the federal police building in Curitiba. Surrounded by his supporters shouting Lula livre (Free Lula), Mr. Lula hugged and kissed his family members and Workers Party (PT) leaders as he left the building where he had spent 580 days since his arrest in April last year.

Then, he climbed a stage in front of the building, grabbed a microphone, and began to address an emotionally charged crowd. “I leave here without hate. At 74, my heart only has room for love because love will win in this country… I leave with the greatest feeling of thanks that one human being can have for another,” said the former Brazilian President.

Mr. Lula, President of Brazil from 2003 to 2010 who retired with more than 80% approval rating, was convicted in a corruption case in 2018. On Thursday, the country’s Supreme Court ruled that it is “illegal to imprison defendants until their appeals process has fully played out”, making the way for Mr. Lula’s release.

Mr. Lula was sent to jail after a trial that has largely been dubbed as dubious by most international jurists. Even as his supporters called the judicial process led by the judge Sergio Moro a “farce”, he was convicted and barred from running for President in 2018. With Mr. Lula out of the election scene, even as most polls showed that he would have won the presidential race, Jair Bolsonaro emerged winner. One of Mr. Bolsonaro’s first moves as the new President was to appoint Mr. Moro as his Justice Minister.

In May this year, the investigative site The Intercept broke a series of stories which exposed that Mr. Moro was “colluding” with the prosecutors who had built a case against Mr. Lula based on very thin evidence. A series of other damaging exposes revealed that Mr. Moro and a band of prosecutors and police officials allegedly collaborated to convict Mr. Lula so that he would not be able to run for President. “Sergio Moro never paid any attention to Lula’s defence. He had a predefined outcome of the process. It was an illegal conviction,” said Cristiano Zanin Martins, the former President’s lawyer who has also challenged Mr. Lula’s conviction on the grounds that Mr. Moro was not an “impartial judge”, as revealed by The Intercept. That case could come up for hearing by the middle of this month.

Mr. Lula’s supporters in Brazil and across the world and neutral observers have maintained that he was a political prisoner. The police building, where Mr. Lula was held since April 2018, became a pilgrimage point for politicians, activists and artists. In May, Hollywood actor Danny Glover met Mr. Lula, whom he called “my friend”, in his 15 square metre cell and demanded his release. In June came Pepe Mujica, the former Uruguayan President who had himself been a political prisoner for 12 years during the Uruguayan dictatorship. Adolfo Pérez Esquivel, the Nobel Peace Prize winner, paid a visit to Mr. Lula in August. “I don’t know another leader who lifted 36 million people out of extreme poverty. This is a feat that needs to be recognised, because getting millions out of extreme poverty is building peace,” said the Argentine. In October, Nobel winner Kailash Satyarthi was at the police building. “Because of his contribution, millions of children had the opportunity not to be enslaved or starving,” Mr. Satyarthi said.

For the South American left, under siege due to the surge in popularity of right-wing parties, Mr. Lula has become a symbol of hope. On October 27, after sweeping the Argentine presidential election, Alberto Fernández, had called for the release of Mr. Lula at his victory rally. As Mr. Fernández shouted Lula libre (free Lula), the crowd became delirious. On Tuesday, he tweeted a thank you note to Mr. Lula. “We will gradually regain our bonds of brotherhood and respect. I take this opportunity to ask for your freedom,” he said.

With the Bolsonaro government stumbling from one scandal to another and his popularity plummeting by the day, Mr. Lula’s release could reset the politics in the biggest South American country. Celso Amorim, who was the Foreign Minister in Mr. Lula’s government, said he could already see a change. In Buenos Aires on the night of Mr. Fernandez’s victory, Mr. Amorim said that the changes in Argentina will spread across the continent. “This election will turn out to be a wind of change like others that have started in the south and spread across the continent,” said Mr. Amorim.

With Mr. Lula all set to hit the streets, the winds may gather more speed.

Shobhan Saxena is a journalist based in São Paulo, Brazil

Each morning since February, Israeli Arab doctor Khitam Hussein has woken up before dawn to rush to a job on the frontline of the country’s fight aga Source: thehindu.com Related

An unidentified gunman opened fire Thursday outside the Moscow headquarters of Russia’s top security agency, killing one officer and wounding five others, officials said. The Federal Security Service, or FSB, said the assailant was acting alone and didn’t enter its building. Earlier, it said the assailant had been neutralized a term usually used by Russian […]