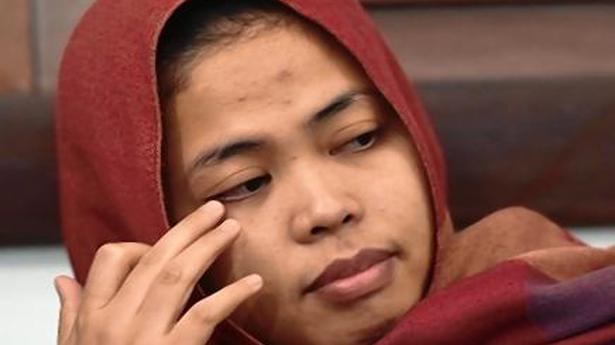 An Indonesian woman accused of assassinating North Korean leader Kim Jong-un’s half-brother was freed on Monday after Malaysian prosecutors dropped a murder charge against her, in a shock decision that delighted her friends and family.

Siti Aisyah smiled as she was ushered into a car outside the court, where she had been on trial for a year and a half alongside a Vietnamese woman for the 2017 murder of Kim Jong-nam at Kuala Lumpur airport. “I feel happy. I did not know this will happen. I did not expect it,” said the 27-year-old, who earlier hugged her tearful Vietnamese co-accused, Doan Thi Huong, in the dock when the news was announced. Indonesian officials mounted a major diplomatic effort to free Ms. Aisyah, which included pressure from the President. The Indonesian Justice Minister had written to Malaysia’s Attorney-General seeking her release, citing problems with the case, and he agreed last week.

The women had always denied murder, saying they were tricked by North Korean spies into carrying out the Cold War-style hit using VX nerve agent, and believed it was a prank for a reality TV show.

U.S., Taliban begin fresh round of talks in Qatar

A fresh round of U.S.-Taliban peace talks began in Qatar’s capital Doha on Saturday, officials said, describing it to be the “most crucial” phase of negotiations to end the 18-year war in Afghanistan. Senior officials privy to the talks said a peace agreement could be expected at the end of the eighth round of talks, […]

Finland’s parliament on December 10 approved the nomination of 34-year-old Social Democrat Sanna Marin as the world’s youngest serving Prime Minister. Out of the parliament’s 200 members, 99 voted in favour and 70 against her nomination. Thirty deputies were absent. “I want to build a society in which every child can become anything and in […]

China said on Thursday foreign airlines blocked from operating in the country over virus fears would be allowed to resume limited flights, apparently Source: thehindu.com Related