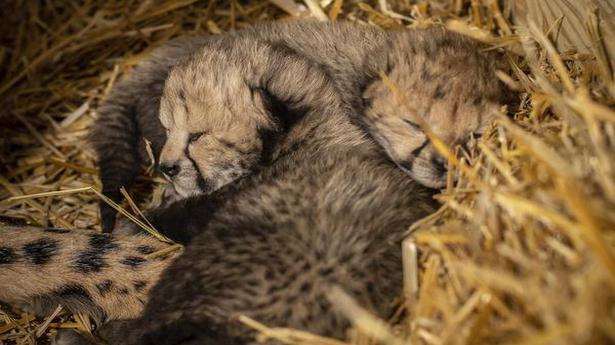 Two cheetah cubs have been born through in vitro fertilization and embryo transfer to a surrogate mother for the first time, Ohio zoo officials announced Monday.

The male and female cubs were born to 3-year-old Izzy at the Columbus Zoo and Aquarium on Wednesday, the zoo said in a statement. A team observed the births through a remote camera and are continuing to monitor Izzy and the cubs.

The biological mother of the cubs is 6-year-old Kibibi who has never reproduced and is too old to easily become pregnant naturally.

Kibibi’s eggs were extracted and then fertilized in a Columbus Zoo laboratory on Nov. 19. The early stage embryos were implanted into Izzy on Nov. 21, and an ultrasound reveled she was pregnant with two fetuses about a month later.

Dr. Randy Junge, the zoo’s vice president of animal health, said this development could have broader implications for managing the species’ population in the future.

It was the third time scientists had attempted the procedure and it was the first time it worked, according to zoo officials.

A Malian Police Commissioner was killed on Thursday by a mob that accused him of links with bandits, the Security Ministry said. Protesters besieged a police station in the central town of Niono, accusing the Police Commissioner, Issiaka Tounkara, of abuses. “A horde of people armed with projectiles of all kinds ransacked the station and […]

Usman Khan, the convicted terrorist of Pakistani origin who was shot dead during last week’s terror attack in London, has been buried in his family’s ancestral village in Pakistan-occupied Kashmir, according to a media report on Saturday. Talking to Dawn Newspaper, the General Manager, public relations, of Pakistan International Airlines Abdul Hafeez said Khan’s body […]

Firebrand cleric-cum-politician Maulana Fazlur Rehman has fired a fresh salvo at Prime Minister Imran Khan, saying the “Gorbachev of Pakistan” was heading a government that has its days numbered. Speaking at a sit-in in Bannu city in southern Khyber Pakhtunkhwa on November 19, the hard-line cleric and leader of the Jamiat Ulema-e-Islam-Fazl (JUI-F) hit out […]