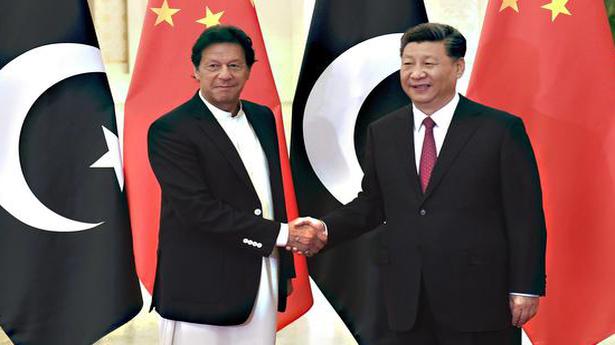 Chinese President Xi Jinping met Prime Minister Imran Khan on Sunday and expressed hope that Pakistan and India can meet each other halfway to improve their strained relations following the Pulwama terror attack by a JeM suicide bomber.

Both leaders also exchanged views on the situations in South Asia, an official Chinese statement in Beijing said about the meeting between Mr. Xi and Mr. Khan.

The BRF meeting was held to highlight the achievement of the trillion-dollar Belt and Road Initiative (BRI) started by Mr. Xi in 2013 in which $60 billion China-Pakistan Economic Corridor (CPEC) is an important component.

India skipped the meeting for the second time, protesting over the CPEC which is being laid through Pakistan-occupied Kashmir (PoK).

The Sunday’s meeting between Mr. Xi and Mr. Khan was regarded significant as it was held in the backdrop of heightened tensions between India and Pakistan following the February 14 Pulwama terror attack carried out by Pakistan-based terror group JeM which killed 40 Indian CRPF soldiers.

China had sent its Vice Foreign Minister Kong Xuanyou to visit Pakistan in March as part of its efforts to ease the tensions.

Mr. Khan’s meeting with Mr. Xi took place when China is under pressure at the United Nations over its repeated attempts to block efforts to declare Pakistan-based JeM leader Masood Azhar as a global terrorist.

Last month, China put a technical hold on a resolution put forth by the US, the UK and France at the UN’s 1267 counter terrorism committee to declare Azhar as a global terrorist.

The US later took the issue to the UN Security Council (UNSC) in a bid to pressure China to take a public stance on Azhar’s issue instead of just putting up blocks at the 1267 committee.

China had expressed its firm opposition to the issue being taken to the UNSC, saying that the matter headed for settlement and blamed the US for scuttling it.

While there is no word here whether the Azhar issue figured in Mr. Xi’s talks with Mr. Khan, officials say there is a sense of wariness on the part of Beijing to block India, the US and other countries’ efforts to blacklist him at the UN on behalf of Pakistan.

Officials hoped that the issue could be resolved in the coming weeks following Mr. Khan’s visit to China.

Prior to his meeting with Mr. Xi, Mr. Khan called on Chinese Premier Li Keqiang during which the two countries signed a number of agreements. Earlier, he met Chinese Vice President Wang Qishan.

During Sunday’s meeting, Mr. Xi expressed China’s firm support to Pakistan to further the bilateral ties between the all-weather allies.

“Pakistan is China’s all-weather strategic cooperative partner. China and Pakistan are ‘iron friends’ and have always firmly supported each other on issues concerning each other’s core interests.” Mr. Xi said.

China takes Pakistan as a priority in its diplomacy, he said.

“No matter how international and regional situations change, China firmly supports Pakistan in safeguarding its sovereignty and national dignity, choosing its own development path suited to its national conditions, combating terrorist and extremist forces, striving for a sound external security environment, and playing a constructive role in international and regional affairs,” Mr. Xi said.

He said major progress had been made in bilateral cooperation in the construction of the CPEC, especially in areas such as finance, trade and other aspects, the statement said.

“In the next stage, China and Pakistan should make more efforts to advance the all-weather strategic cooperation,” Mr. Xi said.

He called on both sides to deepen high-level contacts and mutual support, strengthen strategic communication and promote high-quality cooperation in production capacity, infrastructure construction, people’s livelihood and trade within the framework of the BRI.

Mr. Khan said the CPEC had played an important role in Pakistan’s economic development and the improvement of people’s lives.

He said he believed more and more countries will support and participate in the cooperation under the BRI.

Pakistan is willing to consolidate its traditional friendship with China, deepen pragmatic cooperation and enhance communication and coordination with China in multilateral affairs, Mr. Khan was quoted as saying in the statement.

During his meeting, Mr. Khan spoke a few times about India-Pakistan relations and the prospects of peace between the two countries.

Addressing Pakistan and China Investment Forum in Beijing on Sunday, he expressed hope that the relations between the two neighbours will improve after the Indian general elections.

“We want to build a civilized relationship with our Eastern neighbour and there is a possibility that if we can resolve the Kashmir issue through dialogue, things can improve,” he was quoted by state-run Radio Pakistan as saying.

More than 1,700 Chinese medical workers have been infected by the new virus that has killed nearly 1,400 people and spread to other parts of Asia and as far as the US and Europe, a senior Chinese official announced Friday. Six of the workers have died, Zeng Yixin, vice director of the National Health Commission, […]

Former Justice John Paul Stevens, a Republican appointee to the U.S. Supreme Court who later became an outspoken leader of the liberal wing as the court moved to the right, died on Tuesday at age 99. Stevens, who retired from the court in 2010 at the age of 90, died at a hospital in Fort […]

Without offering proof, Brazilian President Jair Bolsonaro on Friday said actor Leonardo DiCaprio had funded nonprofit groups that he claimed are partly responsible for fires in the Amazon this year. Mr. Bolsonaro’s remarks about the actor were part of a wider government campaign against environmental nonprofit groups operating in Brazil. “DiCaprio is a cool guy, […]