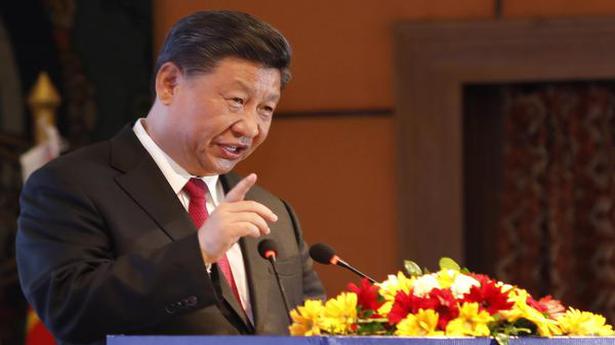 Mr. Xi, who arrived here on Saturday on a two-day visit – the first by a Chinese leader in 23 years, praised Mr. Prachanda’s contributions to the development of the China-Nepal relationship, China’s state-run Xinhua news agency reported.

“Last year, you, together with Nepali Prime Minister K P Sharma Oli, made a political decision by forming the Nepal Communist Party, which opened a new stage for Nepal’s political stability and economic development,” the Chinese president was quoted as saying by Xinhua.

“China and Nepal are bound by mountains and rivers, and stay as close as lips and teeth,” Mr. Xi said.

He said China appreciates Nepal’s long-term and firm support on issues concerning China’s core interests, and is willing to continue to deepen all-round bilateral cooperation, and provide support and assistance for Nepal’s development, so as to achieve greater development of the relationship.

Mr. Xi also briefed Mr. Prachanda on the basic experience of the Communist Party of China (CPC) in exercising full and strict governance over the party, strengthening the building of the ruling party, and consolidating the party’s ruling position.

As both the CPC and the NCP are guided by the philosophy of Marxism, Mr. Xi said, the CPC is willing to strengthen inter-party exchanges with the NCP, establish regular mechanisms for exchanges, and learn from each other’s experience in party building and state governance, so as to build a new type of inter-party ties featuring mutual respect, mutual learning and seeking common ground while reserving differences.

Mr. Prachanda said the NCP admires China’s “unprecedented development, which has been made by the Chinese people under the successful leadership of the CPC.”

Mr. Prachanda said the Nepali side expects to establish a long-term cooperative relationship with the CPC, and hopes to draw on the CPC’s successful experience in state governance, according to the report.

Noting that the two countries have long been enjoying mutual trust and support, Mr. Prachanda expressed Nepal’s readiness to actively participate in the joint construction of the Belt and Road, and scale up exchanges and cooperation, the Xinhua reported.

The novel coronavirus has taken the world by a storm with many already wondering how life would turn out to be after the pandemic. India Today TV’s Rahul Kanwal spoke to Dr Parag Khanna, a global strategist to get a glimpse of the world after Covid-19. Parag Khanna pointed out that there were several incidents […]

French inventor Franky Zapata on Sunday succeeded in crossing the English Channel on a jet-powered hoverboard he designed, zooming over the Strait of Dover in just over 20 minutes. After a previous bid in July that ended with him falling into the sea, Zapata took off from Sangatte, just outside Calais in France at about […]

Mauritania has declared its first fatality from coronavirus (COVID-19), state media reported on March 31, adding to the growing death toll on the African continent. The victim is a 48-year-old French-Mauritanian dual national who tested positive for the virus after she died, according to the Mauritanian Information Agency. State Helpline numbers | Interactive map of […]