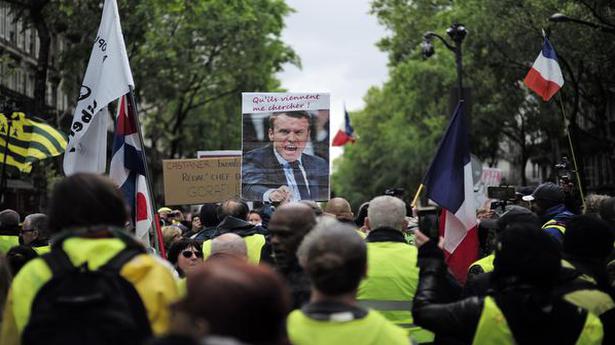 Anti-government protesters marched in France for a 25th straight week on Saturday but in significantly smaller numbers than during the yellow vest movement’s first months or for a May Day rally that attracted tens of thousands of participants.

Protests were also held in Paris and other cities around France, including Nice, Marseille and Lyon, where environmentalists and yellow vest protesters joined forces.

The Interior Ministry counted a total of 2,600 participants at three events in Paris and 18,900 in all of France, a low for Saturday protest marches, according to French media reports.

Security was visibly lighter than on Wednesday, when French officials deployed 7,400 officers from around the country to police the annual May Day march organised by labor unions.

The leaderless yellow vest movement sprang up in mid-November with workers who rely on their cars camping out at traffic circles to protest a hike in fuel taxes.

They wore the high-visibility vests all French drivers must keep in their cars for emergencies.

It quickly expanded to encompass a range of economic issues and policies of French President Emmanuel Macron that were seen as favoring the rich.

Three lists of yellow vest candidates are running in a May 26 election for France’s representatives to the European Union parliament.

Terror needs to be eradicated, so rights and freedoms mean something, a top Indian-American attorney has said as several US lawmakers underscored the importance of human rights in Jammu and Kashmir after the revocation of its special status. Ravi Batra’s remarks came while responding to a Congressional subcommittee on human rights in South Asia. “When […]

Stena Impero, the British-flagged tanker detained by Iran on July 19, may be released within hours, the head of the Swedish firm that owns the vessel said on Sunday. The Stena Impero was detained by Iran’s Revolutionary Guards in the Strait of Hormuz waterway for alleged marine violations, two weeks after Britain seized an Iranian […]

Jeffrey Epstein’s apparent suicide Saturday morning in a federal jail launched new conspiracy theories online in a saga that has provided fodder for them for years, fueled by Epstein’s ties to princes, politicians and other famous and powerful people. Online theorists Saturday quickly offered unsubstantiated speculation — including some retweeted by President Donald Trump — […]