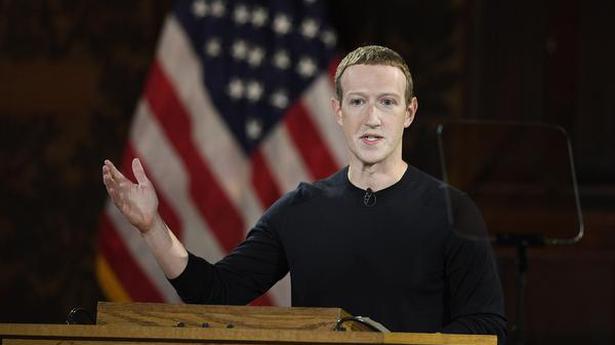 A defiant Facebook CEO Mark Zuckerberg has stressed that his platform has now become a ‘Fifth Estate’ in the world alongside traditional news media and people no longer have to rely on traditional gatekeepers in politics or media to make their voices heard.

Delivering a speech at Georgetown University in Washington, DC on Thursday, he said social media platforms have decentralised power by putting it directly into people’s hands.

“People having the power to express themselves at scale is a new kind of force in the world — a Fifth Estate alongside the other power structures of society,” said Mr. Zuckerberg, apparently challenging those who wish to break up the social networking giant.

Senators and presidential candidates Elizabeth Warren and Kamala Harris are pitching hard to break up Facebook, amid regulators scrutinising the company over anti-competitive practices and privacy scandals.

“People no longer have to rely on traditional gatekeepers in politics or media to make their voices heard, and that has important consequences,” he added.

“I understand the concerns about how tech platforms have centralised power, but I actually believe the much bigger story is how much these platforms have decentralised power by putting it directly into people’s hands. It’s part of this amazing expansion of voice through law, culture and technology,” the Facebook CEO elaborated.

“We don’t fact-check political ads. We don’t do this to help politicians, but because we think people should be able to see for themselves what politicians are saying. And if content is newsworthy, we also won’t take it down even if it would otherwise conflict with many of our standards,” he said.

“Of course there are exceptions, and even for politicians we don’t allow content that incites violence or risks imminent harm — and of course we don’t allow voter suppression. Voting is voice,” Mr. Zuckerberg added.

In an apparent embarrassment for Facebook, Ms. Warren run a fake ad on the social media platform that claimed “Mark Zuckerberg and Facebook just endorsed Donald Trump for re-election”.

Unhappy over Facebook’s announcement that it exempts politicians’ posts from third-party fact-checking, the Massachusetts Senator intentionally made the ad with false claims and submitted it to Facebook’s ad platform to see if it’d be approved.

“It got approved quickly and the ad is now running on Facebook. It changed their ads policy to allow politicians to run ads with known lies — explicitly turning the platform into a disinformation-for-profit machine. This week, we decided to see just how far it goes,” Ms. Warren had tweeted.

Mr. Zuckerberg replied to Ms. Warren in his speech: “I know many people disagree, but, in general, I don’t think it’s right for a private company to censor politicians or the news in a democracy. And we’re not an outlier here. The other major internet platforms and the vast majority of media also run these same ads”.

“Political ads are an important part of voice — especially for local candidates, up-and-coming challengers, and advocacy groups that may not get much media attention otherwise. Banning political ads favours incumbents and whoever the media covers,” he added.

Even if we wanted to ban political ads, he said, it’s not clear where we would draw the line.

“There are many more ads about issues than there are directly about elections. Would we ban all ads about healthcare or immigration or women’s empowerment? If we banned candidates’ ads but not these, would that really make sense to give everyone else a voice in political debates except the candidates themselves?” argued Mr. Zuckerberg.

Prime Minister Boris Johnson’s decision to suspend Parliament less than two months before Britain is due to leave the European Union was unlawful, a Scottish court ruled on Wednesday though it said Britain’s top court must make the final decision. Judges at the Court of Session in Edinburgh said the government’s action was illegal “because […]

Leaders of Malaysia’s ruling party on Sunday renewed a push for Anwar Ibrahim to lead the country, as Prime Minister Mahathir Mohamad dithers on the timing of the planned power transition he had promised to his former rival-turned-ally. Mr. Mahathir, elected to power in May 2018, had promised to hand over the reins to Anwar […]