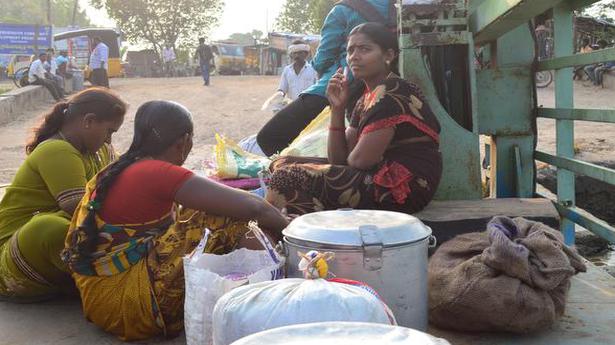 The State government has, in principle, allocated ₹105 crore for the construction of a bridge across the Krishna river channel near the confluence point of the river with the Bay of Bengal, connecting the five islands in the Krishna Estuary to the mainland in Diviseema.

The nearly 500-metre-long bridge will be constructed between Etimoga on the mainland front and Edurumondi island in Nagayalanka mandal of Krishna district.

Avanigadda MLA Simhadri Ramesh told The Hindu on Monday; “In October 2019, I discussed with Chief Minister Y.S. Jagan Mohhan Reddy the immediate need for construction of the Etimoga-Edurumondi bridge. He has, in-principle, granted ₹105 crore for the project, realising the need of the facility meant for above 10,000 population in the cut-off area.”

The Transportation Roads and Buildings (Tr&B) Department is said to have been entrusted with the job of preparing the ground for the design and execution of the project .

In the case of Eelachetladibba, the last island in a row of these islands, people from this island need to cross two channels of river Krishna to reach the mainland by boat.

“The State government’s initiative to construct the bridge should primarily be seen as a humanitarian gesture, as the residents have been deprived of such a facility to lead a comfortable life for decades. It will ensure them timely access to medical and healthcare,” said Mr. Ramesh.

The bridge has been the prime poll promise for political parties that were voted to power in the past few decades. Fishing in the estuary and Bay of Bengal, aquaculture, and agriculture are the prime livelihood for the people in the islands, and many families leave the islands in search of employment during agriculture season.

Cooking gas LPG price was hiked by a steep ₹144.5 per cylinder on Wednesday due to spurt in benchmark global rates of the fuel. But to insulate domestic users, the government almost doubled the subsidy it provides on the fuel to keep per cylinder outgo almost unchanged. LPG price was increased to ₹858.50 per 14.2 […]

Telugu daily Andhra Jyothi’s Bommanahal reporter H.S. Shareefuddin, 50, died in an accident at Srinivas Camp while returning home from Uddehal village late in the night. Mr. Shareefuddin was travelling on a two-wheeler and reportedly hit some horses in the dark. He fell on a rock on the roadside, and had a head injury that […]

Supporters of Vamsi Krishna Yadav on March 17 ransacked the offices of Yuvajana Sramika Rythu Congress Party(YSRCP) in the city to register their protest against denial of Visakhapatnam East Assembly ticket to him. Furious supporters of Mr. Yadav broke windowpanes and furniture at the city and central party offices of YSRCP near Dr. V.S. Krishna […]