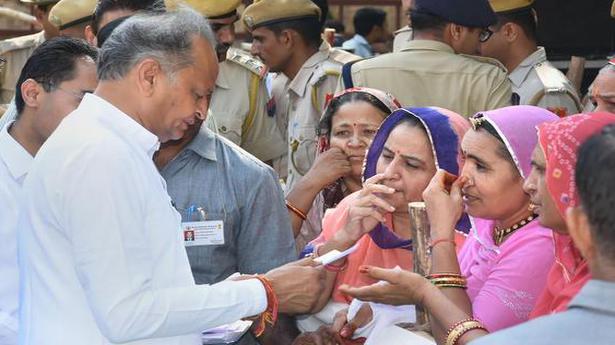 A 15-year old girl met Rajasthan Chief Minister Ashok Gehlot on Monday and sought in intervention in stopping her marriage.

The girl, hailing from Tonk district, met the Chief Minister at a routine public hearing at his residence along with her uncle.

She told Mr. Gehlot that her father wanted to marry her off after the demise of her mother.

Taking note of the matter, Mr. Gehlot directed officials to ensure that the girl is not married off. Following this the officials gave necessary instructions to the district collector and the Superintendent of Police of Tonk, a release said, adding Mr. Gehlot asked the girl to focus on studies and assured her full support of the government.

At the public hearing, people from different parts of the State apprised the chief minister of their problems. Gehlot directed officials to redress their grievances, a release said.

Pakistan Foreign Minister Shah Mahmood Qureshi said that war is not an option to deal with the Kashmir issue amidst fresh India-Pakistan tensions over New Delhi revoking Jammu and Kashmir’s special status.   His remarks came at a time when Pakistan Prime Minister Imran Khan has been repeatedly threatening the possibility of a nuclear war […]

Coronavirus | ‘Federalism’ has been forgotten as all power is now concentrated in PMO office, says Sonia Gandhi

The virtual meeting of Opposition leaders comes almost two months after the Centre declared a nation-wide lock down on March 25. Source: thehindu.com Related

Vishwesha Tirtha Swami, the 88-year-old pontiff of Pejawar Mutt, passed away in Udupi on Sunday. He was 88. He was admitted to the Kasturba Hospital in Manipal for the treatment of extensive pneumonia on December 20 and was shifted to the Pejawar Mutt in Udupi on Sunday morning on ventilator after his health condition worsened. […]