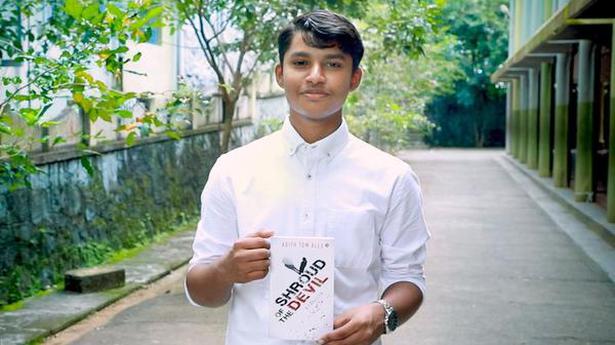 Edward Brooks and John Doe are on an intriguing mission for the United States in the post-Cold War era.

The agent-scientist duo, associated with the Central Intelligence Agency, exhibits youth-like agility, while at times, they sound youthfully mischievous too. Probably because they are fictional characters created by a writer even younger to them.

These two US citizens are the central characters of the English crime fiction Shroud of the Devil, authored by Adith Tom Alex, a Class 10 student from Kanjirappally in Kottayam. The novel revolves around the Stargate Project of the U.S. and runs into 287 pages.

Adith, the head boy of St. Antony’s School, Anakallu, had developed a deep interest in English novels from a young age.

The storyline was developed over a year while he spent just over a couple of months to finish the plot. “It just evolved. I combined my research, historical understanding, and imagination to draw the readers into the setting,” he says. The turning point came when Fr. Michael Anakallingal, former Principal of the Mary Giri Higher Secondary School in Koothattukulam, chanced upon the synopsis of his novel.

Encouraged by his feedback, Adith’s parents, Alex Tom and Siji Sebastian, kept him on the right track.

Another fiction, set in rural Kerala, is already in the works. “The outline of the next novel The Vial of Infinite Hatred is being prepared. I hope to finish it by December,” he says.

Remembering Bristow, a century after his arrival in Kochi

“Newly recovered from a fierce attack of influenza, I sat in my office adjoining the Admiralty Archway… I was wholly concerned with my near future: to go or not to go?” These are not the opening sentences from a novel of magical realism, nor are they from a post-COVID-19 autobiography. The lines are straight out […]

At least 106 passenger trains were either cancelled or short-terminated by Northeast Frontier Railway (NFR) in view of the protests against the Citizenship (Amendment) Act since Wednesday, the NFR said in a statement said on Friday. The NFR has cancelled up and down Guwahati-Dimapur BG Express, Sealdah-Agartala Kanchanjungha Express and the Howrah-Dibrugarh Kamrup Express that […]