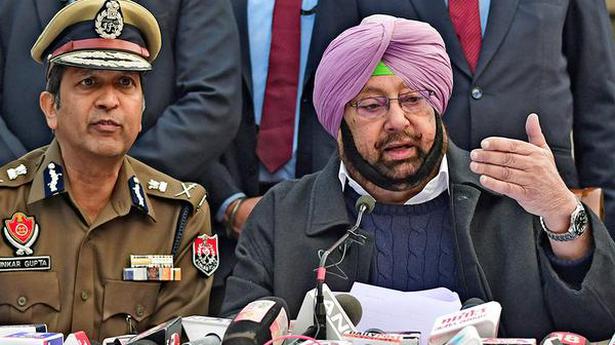 The Special Task Force of Punjab Police seized 195 kg of heroin along with other chemicals from a house in Sultanwind village in Amritsar. Six persons, including an Afghan national, were arrested.

Punjab Chief Minister Amarinder Singh said on Friday that the house in Sultanwind, from which the police seized the contraband on Thursday night, allegedly belonged to Anwar Masih, who was a member of the Subordinate Services Board (SSB) – an appointee of the previous SAD-BJP government.

Investigations were in progress to ascertain Mr. Masih’s involvement, who claims to have rented the house to the arrested accused, said Capt. Amarinder.

The Chief Minister said initial investigations suggested that the drug network was linked to Simranjit Singh Sandhu, one of the biggest drug mafiosi of the country, who has recently been detained in Italy.

The heroin seizure, said Capt. Amarinder, appeared to be part of a consignment of 300 kg that arrived at Mandavi in Gujarat last year and of which 200 kg was smuggled into Punjab.

“Six persons, including an Afghanistan national identified as Armaan Basharmal, have so far been arrested with 194.15 kg of heroin and chemicals. A lot of equipment used for refining of heroin and mixing it with other products has also been seized from Armaan, who had come to Punjab a week ago.” he told reporters here.

In response to questions about his government’s success in combating the drug problem, the Chief Minister said efforts of the STF had led to a major crackdown, with 35,500 cases registered under the NDPS Act between March 2017 and January 2020.

The bollywood celebrities, who are at Nanavati Hospital, shared their health update on Twitter, on Saturday night. Source Related

No formal proposal yet from Centre on advisory council, says JKAP’s Mir

The advisory, if constituted, will for the first time enable a local face to oversee governance issues in Jammu & Kashmir. Source: thehindu.com Related