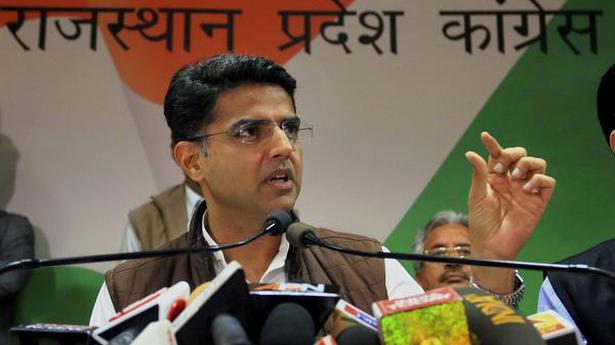 The Congress party’s decision to contest all the 25 Lok Sabha seats in Rajasthan, where it is in power, “without allies” has been perceived here as the party’s strategy to put pressure on the smaller secular parties to accept an alliance on its terms and force them to agree to a limited number of seats.

Deputy Chief Minister Sachin Pilot said here on Tuesday that the selection of candidates was in the final stages and a clearer picture would emerge after the screening committee’s meeting in New Delhi on March 8. He pointed out that the Congress had directly contested all the 25 seats in the 2014 Lok Sabha elections as well.

“Congress is fighting this time against the forces which have weakened constitutional institutions,” Mr. Pilot said. “The candidates will be selected on the basis of their hard work, feedback of party workers and winnability,” he added.

Observers believe that the Congress’s declaration that it would have no truck with allies was aimed at forcing the smaller parties to accept the specific seats it wanted to offer to them, given its own weaker prospects. Besides, the Congress would not be willing to spare more than one seat each for its alliance partners.

While expecting to work on the formation of a grand alliance for the Lok Sabha elections, the Congress had offered a total of five seats to its allies in the 2018 State Assembly election. Two seats each were reserved for Ajit Singh’s Rashtriya Lok Dal and Sharad Yadav’s Loktantrik Janata Dal, while one was kept aside for Sharad Pawar’s Nationalist Congress party.

The RLD’s Subhash Garg, who won the Bharatpur seat by defeating the BJP’s Vijay Bansal by a margin of 15,710 votes, has been appointed Minister of State for Technical Education in the State government.

For the Lok Sabha elections, parties such as the Bahujan Samaj Party (BSP), the Rashtriya Loktantrik Party (RLP) and the Bharatiya Tribal Party (BTP), which have sent a significant number of members to the State Assembly, could have been potential allies. If they were to contest the polls independently, they are certain to make a dent in the Congress’s support base.

Sikar-based political analyst Ashfaq Kayamkhani said on Wednesday that it would be in the Congress’s own interest to reach out to these parties and negotiate with them by offering a sufficient number of seats. “Congress should even take along the Communist parties and make sincere efforts to stop the division of secular votes,” he said.

The BTP has already announced that it will contest the Chittorgarh and tribal-dominated Udaipur and Banswara seats and started its campaign in the Kushalgarh region. The CPI(M) is likely to field former MLA Amra Ram from Sikar and sitting MLA Balwan Poonia from Churu. Mayawati’s BSP and RLP —floated by BJP rebel and Khinvsar MLA Hanuman Beniwal – have announced that they will contest all the seats.

Mr. Kayamkhani said the Congress’ victory in the Assembly election was “just on the edge”, as its vote share was less than 1% higher than that received by the BJP. “In this scenario, it will be suicidal for Congress to go it alone in the Lok Sabha polls, especially when the BJP is whipping up passions and approaching the ex-servicemen to exploit the Pulwama terror attack,” he said.

Hope Indian professionals are continued to be welcomed in US: Indian envoy

During a virtual meeting with Governor of Ohio State Mike DeWine, Taranjit Singh Sandhu discussed various important issues, including the potential collaborations in the sector of higher education and technology where the talent from India can contribute in a significant way Source: thehindu.com Related

Amid the gloomy atmosphere accompanying the COVID-19 crisis, it is the tribal heartland of Adilabad that has given some reason to be happy. The 10-month-old project involving a group of poor Adivasi women in making eatables and savouries from the sacred mahua or ippa flowers (Madhuca indica) has bagged a ₹ 16 lakh order for […]

Non-epileptic attack disorders a cause for concern: Neurologists

When 22-year-old Shwetha (name changed) experienced frequent episodes of transient loss of consciousness in the last six months, the neurologist her parents consulted diagnosed it as epilepsy. However, on a detailed epilepsy work up it was found that her seizures were non-epileptic attacks. She was depressed as she had been forced her to quit her […]