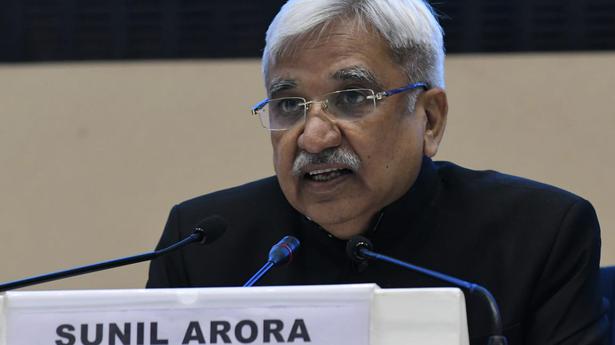 The Election Commission is announcing the schedule for the high-voltage Lok Sabha elections.

The notification for the first phase Lok Sabha poll, which is likely to be spread over seven to eight phases in April-May, could be issued by the end of March for voting some time in early April, sources suggested.

As soon as the elections, in which Prime Minister Narendra Modi will make his bid to return to power amid hectic parleys by several political parties to put a united fight against the ruling BJP, are announced, the model code of conduct will come into force.

It’s now time for the polls schedule.  Seven-phase elections instead of nine-phase one like last elections.

Date of counting: May 23

No. of seats per phase:

The CEC is now making his introductory remarks. Recalls the first election and how it survived the cynicism of the world democracies then.  He now apprises about the series of the meeting the ECI held in States about poll-preparedness.

Nearly 900 million voters are eligible to vote in the polls. That is more than 84 million more than last polls.  About 10 lakh polling station this time  compared to 9 lakh in 2014 polls

Mr. Arora reiterates the announcement that the photo voter slip is no longer a standalone poll document.

And the last button in the EVMs is the NOTA option. Photos of candidates will be displayed in EVMs for the first time.

VVPATs  to be used with EVMs at all stations. Stringent steps for transport and security of EVMs and VVPATs he says.

Model Code of Conduct comes into effect today itself, he says.  Poll code violations can now be reported to the ECI through an app, cVIGIL.

Non-filing of revised Form 26 will result in rejection of candidature. The form seeks info on income of candidates, spouse, dependents, HuF and also assets located overseas and PAN, he says.

Candidates with criminal antecedents need to announce their status thrice before the poll date in local newspapers.

On Central observers, the ECI has decided to send sufficient number of senior officials to spending-sensitive States, he says.

An app has already been introduced for extending facilities to persons with disabilities, Mr. Arora says.

Google and Facebook have agreed to monitoring political ads and content on their platforms. “Social media platforms to ensure that political advertisements published through them are pre-certified by the Commission, they have appointed nodal grievance officials for dealing with complaints of hate messages.”

In 2014, the Lok Sabha poll announcement was made on March 5. The elections for the 16th Lok Sabha, along with the Assembly polls in Andhra Pradesh, Odisha and Sikkim, were held on nine different dates, compared with the five-phase exercise in the 2009 elections.

There is a strong possibility that the EC may go by the precedent and hold Assembly elections in Andhra Pradesh, Odisha, Sikkim and Arunachal Pradesh along with the Lok Sabha polls. Since the Jammu and Kashmir Assembly has been dissolved, the ECI is bound to hold fresh polls there as well within a six-month period, which will end in May.

The poll panel will be holding a press conference at 5 p.m. at Vigyan Bhavan in New Delhi.

Visit is amid mobilisation of its military forces near border with Chittagong. Source: thehindu.com Related

Two alleged terrorists of a banned Manipur-based organisation were arrested from Burari area, police said on Monday. The accused have been identified as Laishram Mangoljao Singh and Hijbur Rahman, both residents of Manipur, they said. The wanted terrorists, against whom Non-Bailable Warrants were issued by the courts concerned, were apprehended from Nirankari Sarovar Bus Standon […]