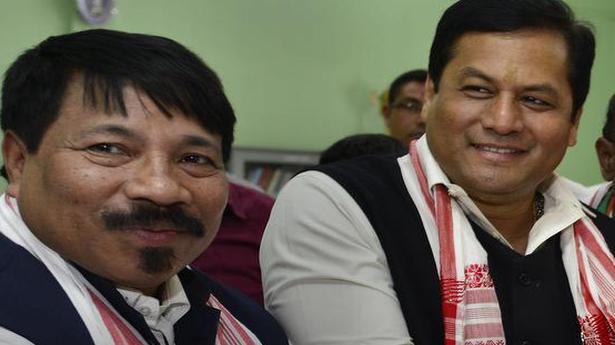 Two months after breaking off over the Citizenship (Amendment) Bill, 2016, the Asom Gana Parishad (AGP) and Bharatiya Janata Party are back as allies in poll-bound Assam.

“After a prolonged discussion with senior AGP leaders, we have decided to work together for the Lok Sabha election in Assam to defeat the Congress. The Bodoland People’s Front will be the third partner in the alliance,” senior BJP leader Ram Madhav said early Wednesday morning.

“We have renewed our ties on the request of the central BJP leadership. The details on seat-sharing arrangement will be announced later,” AGP president Atul Bora said.

He added that he and two other AGP ministers who resigned from the Sarbananda Sonowal government in January after differences over the Bill would resume charge soon.

The rekindling of alliance between AGP and BJP followed announcements by both BJP president Amit Shah and Assam Minister Himanta Biswa Sarma that the party would bring back the Bill if re-elected. BJP spokesperson Jayanta Malla Baruah had on Tuesday categorically stated that renewing the friendship with AGP would be on the condition that it accepts the BJP stand on the Bill.

A section of the AGP led by former Chief Minister Prafulla Kumar Mahanta had opposed the idea of allying with the BJP again, as it would compromise the party’s stand on the Bill. He is learnt to have been offered the post of Governor of Mizoram as a “peace deal”.

Kummanam Rajasekharan had resigned as Governor of Mizoram last week to contest the Lok Sabha polls in Kerala. However, Mr. Mahanta said, “the gubernatorial offer is in the domain of rumours as of now”.

Reacting to the development, the Congress said the party saw the AGP-BJP “remarriage” as the beginning of the end of regionalism in Assam. “AGP is putting the last nail in their coffin. Their leaders will render themselves irrelevant,” former minister and Congress spokesperson Pradyut Bordoloi said.

The Election Commission on Saturday barred political parties from releasing election manifestos in the last 48 hours before polling. The commission has now made the release of election manifestos a part of the Model Code of Conduct (MCC), which is a set of rules to be followed by parties after elections are announced. The amended […]

Watch | LIC through the years

During the Budget 2020 speech, Finance Minister Nirmala Sitharamam said LIC was set to go public. Despite the presence of 24 private companies, LIC has the highest market share in the life insurance segment in India. The history of LIC goes back several decades. 1818 Life Insurance in its modern form came to India from […]