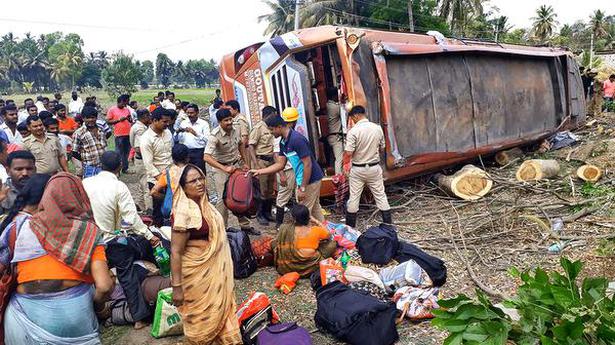 As many as 41 persons sustained injuries after their bus fell into a ditch off the Bengaluru-Mysuru highway, near Maddur, in the district on Sunday.

The victims, including 20 women and three children, were rushed to government hospitals in Maddur and Mandya.

The accident occurred near Aishwarya International School off the highway at 2.30 p.m., said the Maddur police. The passengers were on a pilgrimage tour and left Kolkata on February 17.

They visited places in Karnataka, Tamil Nadu, Andhra Pradesh, and Telangana. They were returning to Kolkata.

The driver failed to notice a truck that was parked on the left side, which resulted in the accident, said a police officer.

People wokring along the highway and local residents called for ambulances to shift the injured to hospitals.

While most of the injured were treated as out-patients, around 10 passengers were admitted to the Mandya Institute of Medical Sciences (MIMS) here as in-patients, police said.

According to the police, they will be discharged from hospitals on Tuesday and the remaining passengers have decided to continue their journey through alternative vehicles or trains.

Police to visit villages for inquiry in four districts

Two Indian Army jawans were killed when the Pakistan Army resorted to heavy firing in Rajouri district last week. The Pakistan Army on Monday violated ceasefire and resorted to heavy firing and mortar shelling targeting forward posts along the LoC in Jammu and Kashmir’s Poonch district, drawing retaliation from Indian troops, officials said. “At about […]

PSLV-C49 will launch EOS-01 on Saturday. The countdown for the November 7 launch of earth observation satellite EOS-01 along with nine international customer satellites on board launch vehicle PSLV-C49 has begun, ISRO said on Friday. The launch is scheduled at 15:02 Hrs IST on Saturday. “PSLV-C49/EOS-01 Mission: The countdown for the launch of PSLV-C49/EOS-01 mission […]