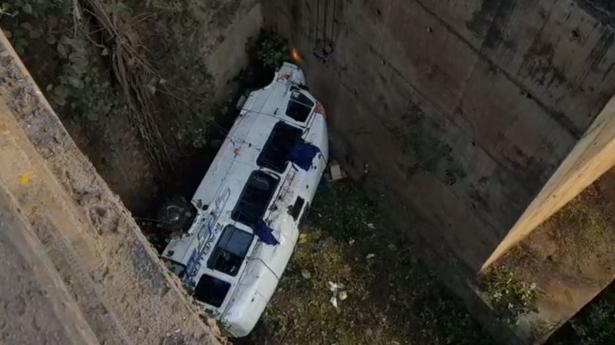 Victims from Vashi and Koparkhairane, all belonging to one family, had set out for a vacation to Goa

Five people died and seven others were injured in an accident on the Pune-Bangalore highway early on Saturday morning near Satara, around 288 km from Mumbai.

The accident occurred around 4.30 a.m. when the driver of the minibus in which they were travelling nodded off at the wheel and the vehicle fell from Tarali river overbridge into a 50-feet gorge.

All 11 travellers, belonging to one family, left Navi Mumbai on Friday at 9 p.m. for a vacation in Goa. They stopped at Khopoli for dinner and then started the journey again.

On the outskirts of Umraj village in Satara, after reaching Tarali river overbridge, the driver dozed off. The vehicle rammed onto the edge of the bridge and fell into the gorge. “The bridge is a two-lane bridge with a gap in between two lanes. After the vehicle fell into the gorge, one of the injured rang phone the police and we reached the spot. The vehicle was taken out with the help of a crane,” said Superintendent of Police, Highway Safety Patrol, Pune, Sanjay Jadhav.

While the injured are being treated at Satara civil hospital, the bodies are at Karad civil hospital. The family, originally hailing from Kerala, was settled in Navi Mumbai since years.

The driver, Mr. Gupta, has been booked by Umraj police for rash driving and causing death by negligence.

The clock is ticking

The clock is ticking. Political parties are trying to beat the clock in every way they can. A countdown digital clock has been put up at the YSR Congress Party headquarters at Lotus Pond in Hyderabad. The clock gives the time left for the Chandrababu Naidu Government with the words “Bye Bye Babu” and welcomes […]

Air India Express on March 9 said passengers can reschedule their tickets free of cost for all bookings made between March 12-31, in the wake of COVID-19 outbreak. The airline, the budget arm of national carrier Air India, flies to 13 international destinations, mostly in the Gulf region. “In view of the uncertain travel situation […]