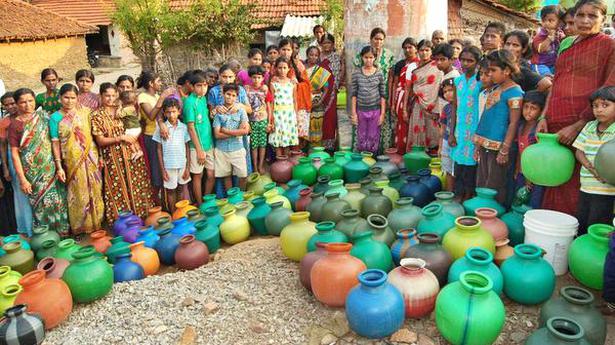 Residents of 61 villages in K.R. Pet, Maddur and Nagamangala taluks in the district are facing severe drinking water scarcity for several days now.

This was discussed at a meeting chaired by Javed Akthar, district in-charge secretary, here on Monday. He issued instructions to the officials to address the issue. He also suggested that tahsildars and other officials concerned visit the parched areas and take measures to solve the issues. The most affected villages are in Nagamangala taluk, the native taluk of L.R. Shivarame Gowda, incumbent Mandya MP.

Ramakrishna, Executive Engineer, Department of Rural Drinking Water Supply and Sanitation, told the meeting that 59 villages in Nagamanagala taluk and one in Maddur taluk have been facing drinking water problems. Residents of one village in K.R. Pet taluk are also facing shortage of drinking water. The department has been supplying water to residents of 61 villages by tankers. It is using water from private borewells in 17 villages.

A man was arrested in Mangaluru for allegedly spreading malicious content and rumours on social media against Karnataka government functionaries engaged in the work against COVID-19. He has been identified as Nizam alias Neeza. He was produced before a local court and remanded to judicial custody on Tuesday, Police Commissioner P.S. Harsha said in a […]

Free medicine given to civic workers

KMC Hospital on Wednesday opened the centre for comprehensive knee and hip care at its B.R. Ambedkar Circle hospital unit. Talking to reporters, Yogeesh D. Kamath, the Consultant Knee and Hip Specialist Surgeon of KMC Hospitals, said patients will get all services for knee and hip joints under one roof. Surgery alone will not be […]