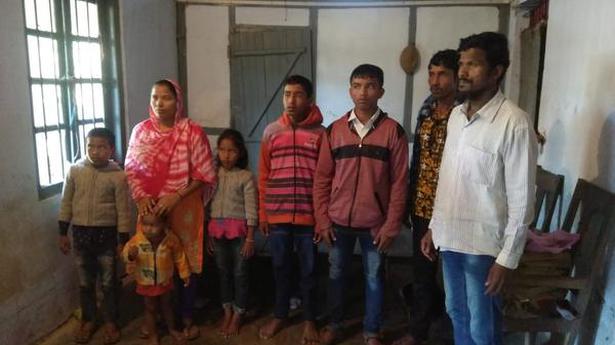 The police in southern Assam’s Hailakandi district arrested eight Myanmar-origin Rohingya people, five of them minors, who were said to have entered India illegally from Bangladesh.

Their arrest on Saturday followed that of 14 other Rohingya people from a train in West Bengal’s New Jalpaiguri. They had boarded a train from southern Assam’s Badarpur and were travelling on fake identities.

“The eight were arrested from the house of one Md. Yusuf Ali Mazumdar in Mazarpur village under the Algapur police station,” Hailakandi’s Superintendent of Police Pabindra Kumar Nath said. He added that Mr. Mazumdar was absconding but his brother Islamuddin Mazumdar was apprehended.

The police said cases under relevant sections of the Foreigners’ Act and Passport (Entry to India) Act were registered against the Rohingya people who are believed to have escaped from a refugee camp at Cox’s Bazaar in Bangladesh.

Efforts were on to send the minors to an observation home, the police said.

PSLV to launch military’s eye in the sky

Monday’s PSLV mission carrying EMISAT — the country’s first satellite for gathering electronic intelligence (ELINT) to locate hostile radars for the military — will also be the longest flight for the Indian polar launch vehicle. The April 1 mission is numbered C-45 and carries 28 small, foreign customer satellites from four countries. The satellites together […]

Scores of policemen were quarantined in Kashmir on Thursday, after a policeman and the son of a sub-inspector tested positive for the novel coronavirus in central and north Kashmir. Meanwhile, 14 new positive cases pushed up the total number of cases in J&K to 314. An official said the constable, posted with the India Reserve […]