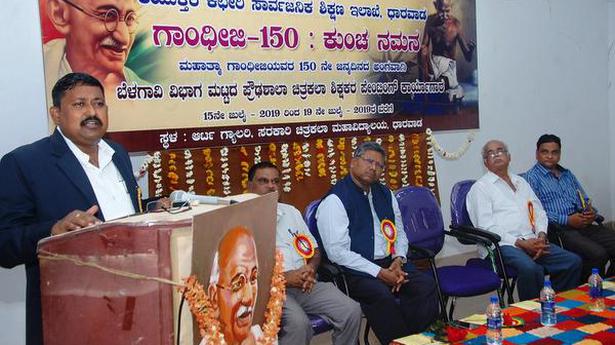 Expressing concern over Mahatma Gandhi being subjected to criticism and condemnation in his own country, Additional Commissioner of Public Instructions (DPI) Siddhalingayya Hiremath said that most of those misconceptions about Gandhiji have emanated owing to lack of proper information about his life and works.

Inaugurating “Gandhiji 150-Kuncha Namana”, a five-day Belagavi divisional art teachers workshop organised as part of the 150th birth anniversary of Mahatma Gandhi here on Monday, Mr. Hiremath said that while foreign countries are keen on studying, propagating and adopting the principles of Mahatma Gandhi, Indians are regretfully lagging behind in this direction.

Today, nearly 80 nations across the globe have embarked upon special projects to study Gandhiji. Leaders of foreign countries have high regards for Gandhiji and they are keen on emulating his principles. But the amount of enthusiasm about Gandhiji among Indians is comparatively less and it is diminishing by the day. One needs to understand that Gandhiji is not just limited to India or Indians. Instead, his persona and principles have universal relevance, he said.

Regretting over a section of people engaging in maligning Gandhiji over the social media, Mr. Hiremath asked whether those who are ridiculing or condemning Gandhiji had seen him alive or taken pains to taking up deep and serious studies on his life and works. Those indulging in ridiculing or condemning Gandhiji are doing so because of sheer lack of authentic information. In case of great personalities, one need to study their life and works before venerating or criticising them. It is the time to focus more on studying, propagating and sensitising people to adopting his life,works and principles so that the coming generation is not misled, he said.

Mr. Hiremath suggested that teachers should shoulder the responsibility of imparting correct information about Gandhiji and other such great persons who have sacrificed their lives for the sake of the country, to children. If today’s children were sensitised properly, they would grow as responsible and informed citizens of tomorrow. Moreover, disseminating correct information about Gandhiji is necessary to do away with widely prevailing misconceptions about his life and works, which, in turn, resulted in levelling of baseless criticism against this great personality, Mr. Hiremath said.

Department of Public Instruction in-charge Director for Primary and High School Education B.K.S. Vardhan said that no one could ever match Gandhiji in universal leadership qualities. The very tendency of finding fault in great persons and highlighting them with the sheer intention of maligning their personality is not correct. “Society could undergo radical changes if people try to emulate the good qualities of great persons instead of indulging in finding holes. We need to introspect before condemning others,” he said.

Senior officials of the Department of Public Instructions were present. A total of 80 teachers from nine educational districts are participating in the workshop.

After a controversial Trinamool MLA in the Birbhum district joined it, the Bharatiya Janata Party (BJP) has revised its recruitment policy in West Bengal on advice from the Rashtriya Swayamsevak Sangh (RSS), a senior party leader told The Hindu. Now any induction — other than that of very senior leaders — will be conducted only […]