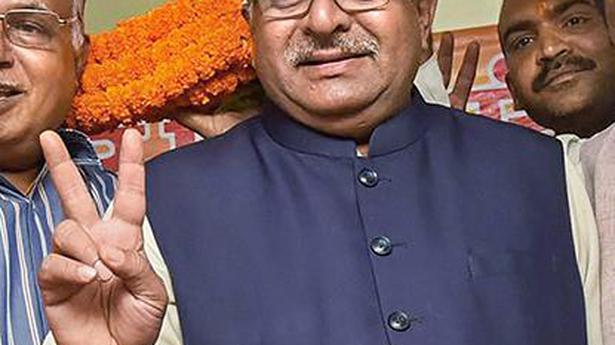 Patna Sahib is one of the few parliamentary constituencies of the total 40 in Bihar where the election will be keenly observed for different reasons. Shatrughan Sinha, who recently quit the BJP and joined the Congress, is pitted against BJP candidate and Union Minister Ravi Shankar Prasad, who is contesting the Lok Sabha poll for the first time.

Both the leaders are from Patna and belong to the upper caste Kayastha community. Both are known as “high-flying” leaders in the constituency and are said to be totally “disconnected” with the voters. With a sizeable number of Kayasthas, Patna Sahib has been a safe seat for the BJP. Out of the six Assembly segments in the constituency, five of them have BJP MLAs and one (Fatuha) has an RJD legislator. Mr. Sinha has been winning the seat for the last two consecutive terms on a BJP ticket.

“Mr. Sinha is more known for his dialogue delivery and has no connection with the voters,” says a voter. According to Lok Sabha records, between 2014 and 2019, he neither asked any question nor participated in any debate and his score for introducing a private member’s bill was also zero. Also, he was present on only 67% of the days when the Lok Sabha was in session.

“It’s a safe BJP seat with the sizeable upper caste Kayastha vote, but this time he will have a tough time,” says city businessman Arvind Kumar Jha.

Similarly, Mr. Prasad is more known as a high-flying leader. “He has been a Minister at the Centre…but he is thoroughly disconnected with the voters, ” rued engineer Rajesh Kumar.

The BJP had to face some embarrassing moments recently when during Mr. Prasad’s arrival in Patna there was a scuffle between his supporters and supporters of another party Rajya Sabha MP R.K. Sinha at the Patna airport. Mr R.K. Sinha too wanted to contest from the Patna Sahib seat on BJP ticket.

The billionaire businessman is said to be more popular than Mr. Prasad among the Kayastha community as he has been regularly helping poor Kayastha families by organising mass marriages and giving employment to young men in his security agency.

Chinese President Xi Jinping will arrive in Chennai for the second “informal summit” with Prime Minister Narendra Modi on October 11-12, both New Delhi and Beijing announced on Wednesday. “The forthcoming Chennai Informal Summit will provide an opportunity for the two leaders to continue their discussions on overarching issues of bilateral, regional and global importance […]

The Bombay High Court on Thursday came down heavily on the Maharashtra government for dragging its feet over financial aid to Wadia Hospitals for women and children, and said the government has money for statues but not for public health. A division bench of Justices S.C. Dharmadhikari and R.I.Chagla was hearing a public interest litigation […]

Number of infections in the past 24 hours is 92 Source: thehindu.com Related