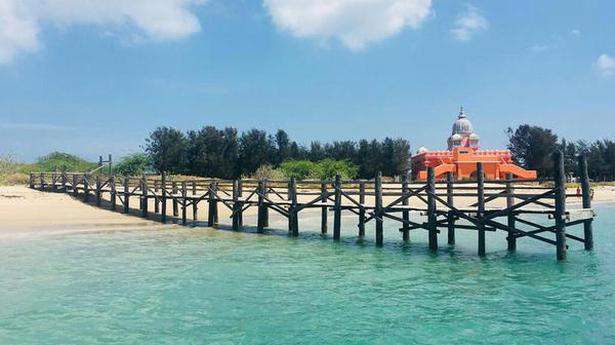 Tourists at the Gulf of Mannar Marine National Park can get a closer look at underwater treasures, including the corals, as glass bottom boat rides will be introduced soon.

The Tamil Nadu Forest Department is all set to start the much-awaited ‘glass bottom boats eco-tourism’ in the park after demarking the eco-tourism zone covering four of the 21 islands in the Mandapam sub-group.

As part of exploiting the tourism potential at the historic Rameswaram island, the department has drawn up an ambitious plan to promote eco-tourism during June first week after completing the demarcation of the tourism zone area by installing buoys by the month-end.

Officials said Indian Institute of Technology Madras, which has been awarded the contract for installing the buoys, has begun making sinkers — one-tonne weighing concrete structures, which would keep the buoys at their assigned positions. The sinkers were being made at Kunthukal, near Pamban, they said.

The 28 buoys would be installed around Kurusadai, Poomarichan, Pullivasal and Shingle, at a distance of 500 meters between two buoys, officials said. A boating jetty has been constructed at Kunthukal at ₹5 lakh and the existing jetty at Kurusadai has been revamped at a cost of ₹2 lakh, they said.

As the tourism in the pristine natural areas should not disturb the biosphere reserve, the department has proposed to allow only around 100 tourists a day from 6 am to 1 pm on first-come-first-served basis.

Bookings would be only online and an exclusive website was being developed, officials said.

Chinese President Xi Jinping will arrive in Chennai for the second “informal summit” with Prime Minister Narendra Modi on October 11-12, both New Delhi and Beijing announced on Wednesday. “The forthcoming Chennai Informal Summit will provide an opportunity for the two leaders to continue their discussions on overarching issues of bilateral, regional and global importance […]

‘Telling people the impact of weather is more important’

With large swathes of India reeling under the onslaught of excess rainfall this year, Dr. M. Rajeevan, Secretary, Ministry of Earth Sciences (MoES) on Monday stressed upon the need for enhancing impact-based forecasting in the near future, and said the MoES was closely working with the United Kingdom’s Meteorological Office to frame a policy in […]