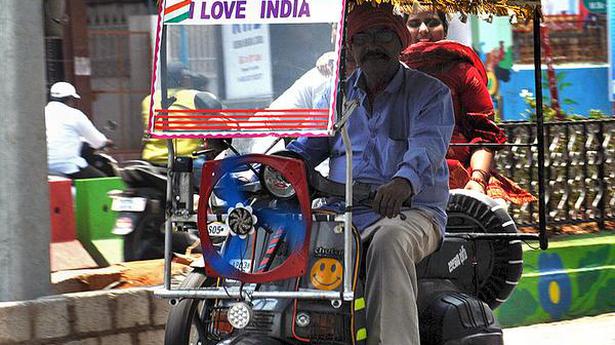 An ingenious mechanic was the cynosure of all eyes as he motored down the arterial trunk road on a scooter with attachments to protect himself from the searing summer heat.

Curious to know more about the attachments, the mechanic, Sk. Jilani, was stopped at busy junctions as he developed on his own sun roof shade and other attachments to his scooter to keep himself cool while on the move at a time when a majority of persons either keep themselves indoors most part of the day or huff and puff unable to bear the scorching summer heat.

The special two-wheeler comes in handy especially for sales executives who have no option but to extensively travel throughout the year whether it rains or shines, says 60-year-old Jilani while fitting an attachment to a motorcycle at his workshop near the East KB Restaurant.

The attachments per two-wheeler, all put together, including miniature fan, costs just ₹5,000, the mechanic, who undertakes tinkering and welding works for four-wheelers and rebuild vehicles that crashed in accidents, says in a conversation with The Hindu.

Motorcyclists can protect themselves from dust and hot winds while on the move, he adds after taking orders from interested two-wheeler owners to fit their vehicles with the attachments.

“One can easily travel up to a speed of 70 kmph without any wobbling,” says a confident Mr. Jilani. He takes just two to three days for fitting each vehicle with the attachments and modifies the same as suggested by his customers.

Five Indian sailors have been abducted by pirates in Nigeria and External Affairs Minister Sushma Swaraj has asked the Indian high commissioner there to take up the matter at the highest levels of the Nigerian government to ensure their release. She also asked Indian ambassador in Nigeria Abhay Thakur to send her a report on […]

The Bharatiya Janata Party has fielded two ex-Congress legislators Alpesh Thakor and Dhawalsinh Zala from Radhanpur and Bayad for the Assembly byelection in Gujarat. The party has also announced candidates for the remaining four seats. They are: Jagdish Patel from Amraiwadi in Ahmedabad, Ajmalbhai Thakor from Kheralu, Jignesh Sevak from Lunavada and Jivrajbhai Patel from […]