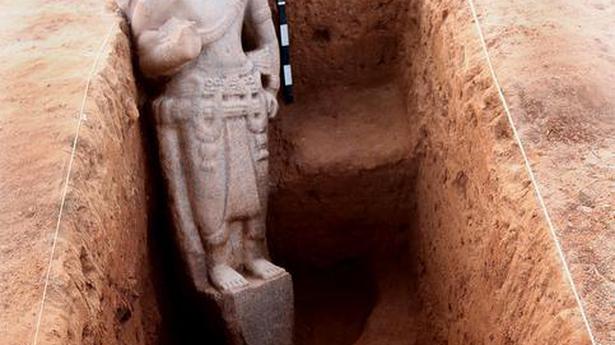 A maritime trade centre based out of a fortified settlement near the banks of the Swarnamukhi river in Andhra Pradesh’s Gottiprolu may have had a trade guild with its own army to protect its interests around 2,000 years ago, according to Archaeological Survey of India officials involved in the excavation of the site.

ASI superintending architect T. Sreelakshmi said the second round of excavations at the site that is near Naidupeta, about 80 km from Tirupati and Nellore, would start in November or December.

The first round of excavation at the site, which started in December last year and ended in September, unearthed a huge settlement surrounded by a brick enclosure that may have had a moat around it.

The excavation unearthed brick-built structures in elliptical, circular and rectangular shapes. The size of bricks (43 to 48 cm) can be compared to those in the Satavahana/Ikshvaku period structures in the Krishna valley, according to the ASI. This means the site may date back to 2nd century to 1st century BCE, it said.

A four-armed 2-metre tall sculpture of Vishnu was unearthed at the site that can be dated back to the Pallava period (8th Century CE), looking at its features like head gear and drapery, the ASI said.

The excavation also unearthed a series of broken terracotta pipes that fit into each other, pointing towards a form of drainage.

“This appears to be a trade centre in south coastal Andhra Pradesh. We have found evidence of its strategic location for trade. Trade guilds used to control such centres and they used to have their own armies to protect their interests. In fact, kingdoms which had contacts with guilds, used to give them a role in administration. We aren’t saying that there was a guild at this site, but we have got some evidence to point towards it,” she said.

She added that so far the ASI had excavated about 10% of the site and would start on the second round of excavations in November or December, when more evidence was likely to be unearthed.

The Aam Aadmi Party on Tuesday released its full list of 70 candidates for the Delhi Assembly elections due on February 8. All seven AAP Ministers got party tickets and three of its 2019 Delhi Lok Sabha election candidates — Atishi, Dilip Pandey, and Raghav Chadha — made it to the list. Also, leaders who […]

Heavy rainfall in Belagavi for over a week now has disrupted life in the city. Many low-lying areas remained inundated and water entered houses and shops in several areas. Homemakers struggled to flush out water from their homes in areas like Maratha Colony, Nanawadi, Goods Shed Road, Anagol Wada, Samarth Nagar and Old PB road. […]

Inspector General of Police Abdur Rahman, currently posted with the State Human Rights Commission, on Wednesday announced his resignation from the service in protest against the Citizenship (Amendment) Bill. Speaking to The Hindu, Mr. Rahman said, “The Bill itself is against the basic structure of the Constitution which is equality before the law. If you […]