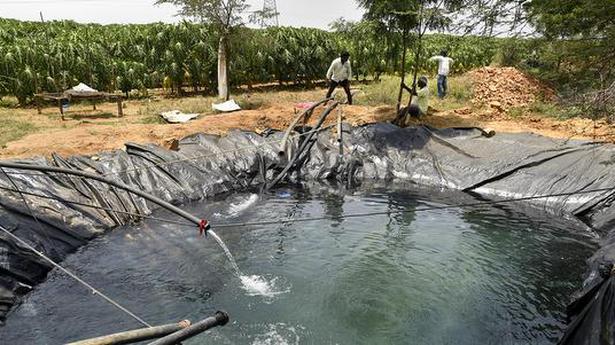 At the outset, this farmer’s resolve to save his 6.5-acre standing papaya orchard appears nothing short of a ‘Bhagiratha Prayathnam’ (a prodigious or Herculean effort) as explained locally as he has sunk more than 10 borewells to meet irrigation needs of the crop which is expected to reach the harvesting (fruit-cutting) stage in late May.

He did not stop there when his efforts started proving to be insufficient due to fast depletion of groundwater table in the recent months and he rented two borewells of neighbouring farmers to utilise available water. The irony is that his farm at Chandrakal village of Pedda Kothapally mandal is at the highest gradient in the area and water from Jurala Right Main Canal and Kalwakurthy lift irrigation scheme reaches areas only a few kilometers away on either side.

Bolgam Srinivas, a farmer with a never-say-die attitude, planted a Taiwan variety papaya in 6.5 acres in November last and as he nurtured it carefully with drip irrigation the entire orchard is bearing tender papayas now. However, he started facing water shortage in all his borewells, which were able to pump at least some quantity of water till a couple of months back, and some of them have gone dry now due to over 36% average deficit rainfall in the district. The average groundwater table of the district has improved over the last couple of years due to filling of minor irrigation tanks with Jurala and Kalwakurthy water.

Unable to get required water from all his functional borewells he formed a farm-pond to collect water at one point and re-pump it to the drip system to ensure required pressure. “Although free 24×7 power supply has allowed me to run borewells anytime, depleting water table has become a major worry to save the orchard. I have covered the bed of my farm-pond with thick polythene sheets to prevent wastage of storage water through seepage,” he said.

The farmer has invested heavily on sinking borewells over the last few agricultural seasons and raising papaya crop. “I may have invested nothing less than ₹8 lakh on borewells so far and another ₹2 lakh on the papaya crop. I have also rented two borewells for ₹90,000 till completion of standing crop,” Mr. Srinivas explained.

If everything goes well and the farmer gets expected quantity and quality production of papaya he would be in a position to clear all his expenditure (investment) and be left with some profit. “I hope the borewells will hold required water till cutting of my papaya crop,” the farmer said optimistically.

According to horticulture officials, the average yield of papaya, if nurtured well, is about 25 to 30 tonnes an acre and the present market price is about ₹8,000 per tonne.

Electricity Minister M.M. Mani has said the government and the Kerala State Electricity Board will give due importance to solar power generation. Inaugurating the renovated office building of the Vythiri grama panchayat here on Monday, Mr.Mani said the government was making interventions in the power sector as it was essential for the State’s development. Priority […]

Members of the women’s wing of Mandya District Congress Committee staged a protest here on Saturday to oppose the hike in the price of LPG cylinders and the alleged failure of the Centre in curbing the increasing cost of essential commodities. The protesters took out a rally from their office to the Deputy Commissioner’s office […]