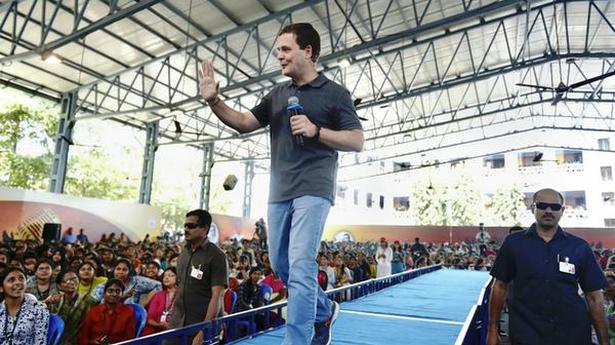 Ten days after the Congress announced Mr Gandhi as the party candidate from his traditional seat of Amethi in Uttar Pradesh, there is a clamour for him to represent one of the southern States.

Former Karnataka Chief Minister Sidddaramaih, the first to suggest through a tweet, quoted history of Sonia Gandhi, winning the Bellary seat in 1999 and Indira Gandhi winning Chikmagalur in 1978.

From Kerala to Tamil Nadu, State Congress units are competing with each other in trying to host the party chief as a candidate. While some of the enthusiasm could be put down to sycophancy, something the Congress is known for, those who support the idea of Mr. Gandhi contesting from a second seat want to convey a specific political message at a time when BJP’s national footprint is growing.

They want to build on Congress’ legacy of being a pan India party and contrast the the BJP as a one that rooted in the Hindi-belt States of North India.

“There is a divide between the South and North in the country and it has increased during the five-year period of the BJP government led by Prime Minister Narendra Modi. It could be bridged if Rahul Gandhi contests and is elected from Tamil Nadu,” Tamil Nadu Congress Committee (TNCC) president K.S. Alagiri told The Hindu.

Among the southern States, the Congress party’s choice could be limited. Post bifurcation of erstwhile Andhra Pradesh, the party lost ground in both Andhra and Telangana. In Tamil Nadu, the party can hardly boast of a strong organization or a cadre base. While the organization in Kerala is strong, Karnataka is the only State where it is sharing power with Janata Dal (Secular).

However, if Mr. Gandhi decides to contest a second seat from any of the southern States, the move is expected to rejuvenate Congress workers.

It may also help Mr Gandhi’s stock as a leader who is capable of fighting an election from any part of India, something the 2014 Lok Sabha elections did for Narendra Modi.

Mr Modi’s victory from Vadodara with over 5.7 lakh votes reiterated his claim of being the ‘undisputed leader’ of Gujarat in the 2014 elections while his win from the Varanasi Lok Sabha seat bolstered his party presence in Uttar Pradesh.

Mr Siddaramaiah’s suggestion, however, is also being interpreted as a sign of nervousness in the Congress camp, especially, with union minister Smriti Irani gearing up for a fight from Amethi.

Political analysts are viewing it a sign that the Congress could be looking for a ‘safe second seat’ for its party chief.

“There is a natural and fully understandable surge of enthusiasm among cadres in four or five Congress ruled States, where Rahul Gandhi has led the party to victories. In fact, I wouldn’t be surprised if this demand came from other parts of India, “said senior Congress spokesperson Abhishek Singhvi and quickly added,”While respecting the sentiments, I think it is even wrong to suggest that Rahul Gandhi is contesting from anywhere else other than Uttar Pradesh”.

With inputs from B Kolappan

No ‘preraks’, only coordinators for Congress, says Sonia Gandhi

Congress President Sonia Gandhi on Thursday turned down a proposal to have ‘preraks’ (motivators) for conducting party’s outreach activities across the country. There was consensus at a meeting of Congress’ top brass chaired by Gandhi to continue with the old system of having trainers who would further be tasked with the responsibility of propagating party’s […]

CAA: Curfew reimposed after 1 dies in another clash in Meghalaya

Curfew was reimposed in Shillong and other parts of the State on Saturday after a person was killed in a marketplace, taking the toll to two in as many days of communal clashes. The situation in six districts of the State’s eastern half has been tense following Friday’s clash at Ichamati in the East Khasi […]