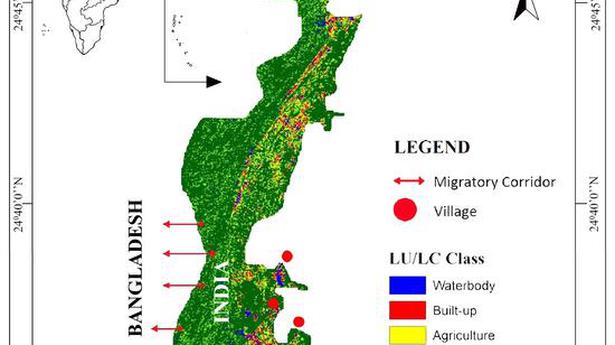 A herd of six female elephants surviving under severe anthropogenic stress may be helped by trans-boundary conservation, say scientists. For several years now, the beleaguered group has been negotiating the international border between India and Bangladesh, ranging from the western side of the Karimganj district of Assam to the eastern side to the Sylhet district of Bangladesh.

In a publication titled “The importance of trans-boundary conservation of the Asiatic Elephant Elephas maximus in Patharia Hills Reserve Forest, northeastern India”, scientists have called for “joint conservation activities” for the protection of the herd. The paper was published in the Journal of Threatened Taxa.

Researchers said that its last male elephant died almost five years ago, causing the population to stagnate. Electrocution caused the death of a female elephant in 2017.

“The elephants are now divided into two small herds with three in each group, and one herd always follows the other. They stay on both sides of the forest, that is, the sections in India as well as Bangladesh, and cross the border frequently. They have broken border fences to use their migratory corridor,” Parthankar Choudhury, one of the authors of the publication, said.

The researchers said a greater part of the elephants’ habitat lies in southern Assam’s Patharia Hills Reserve Forest, where a lot of illegal settlements have come up in the recent decades. The publication points out that “if conservation action is not taken up, the Reserve Forest (RF) will be a dense human settlement area without any trace of wildlife in the near future.”

“During the summer, from April to July, the elephants stay in Bangladesh, while in the winter, from November to December, they prefer to remain in the forest patches and tea estates of the Indian side,” Professor Chowdhury, Head of the Department of Ecology and Environmental Science, Assam University, told The Hindu.

The authors of the paper said that the elephants’ “shifting pattern of migration may be due to the food shortage on both sides as anthropogenic activities have increased.”

Vayalkilikal to test its impact in LS polls

This is a winning proposition for government as it will provide the much-needed additional tax revenue for COVID-19 stimulus package, says VOICE Source: thehindu.com Related

Two groups of people clashed in Bhainsa town of Nirmal district around late in the night on Sunday, January 12. District Superintendent of Police C. Shashidhar Raju and Bhainsa CI Venugopal Rao were injured in the violence and were treated at a local hospital. According to reports, both sections mutually hurled stones at the Korbagalli […]