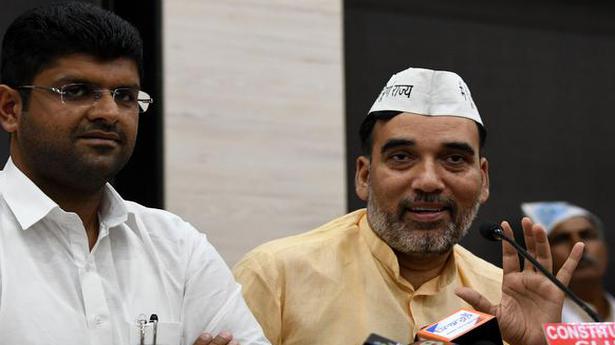 The AAP has fielded its Haryana unit chief Naveen Jaihind from Faridabad; former Himachal Pradesh Director-General of Police (DGP) Prithvi Raj from Ambala; and advocate Krishan Kumar Agarwal from Karnal. The announcement was made by senior AAP leader and Haryana in-charge Gopal Rai in a joint press conference with JJP leader Dushyant Chautala at the party’s Delhi office.

Born in a Dalit family in Haryana’s Jagadhari, Mr. Raj was the DGP-Himachal Pradesh for six months before he retired in 2017. He has been actively involved in Dalit movements since his college days. Mr. Agarwal, a practising lawyer at the Panipat District and Sessions Court, has been part of the Jan Lok Pal movement.

The JJP has already announced four of its seven candidates and is expected to make public the remaining names by the evening. JJP sources said party leaders were waiting for the Congress to declare its candidates before making the announcement.

Slamming a Bharatiya Janata Party (BJP) survey which reportedly claims that the saffron alliance would win 229 of the 288 seats in the upcoming Assembly polls, Congress on Wednesday challenged the ruling party to conduct elections on ballot paper since it was confident of winning. “The BJP is known to manage surveys. The over-confidence of […]

145 days of internet shutdown in Kashmir, no word on service restoration