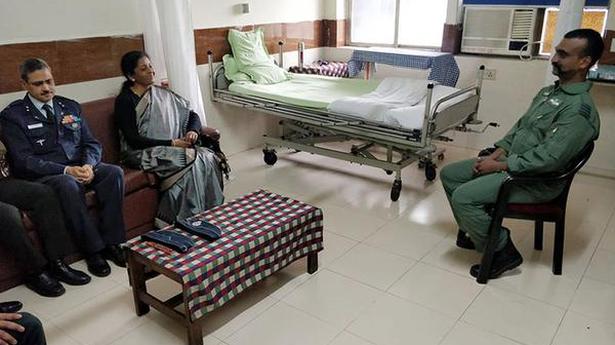 “We wanted to send a message to India. We don’t want to increase your grief, we don’t want to mistreat your citizens, we just want peace,” he told BBC Urdu in an interview.

The pilot was captured by Pakistani troops after his jet crashed on the other side of the border on Wednesday.

In a separate interview with BBC, the Foreign Minister said both countries were still in a very serious situation. “We still are… it isn’t over!… We are on high alert.” Both India and Pakistan have issues, “but how do we resolve these issues? By firing missiles at each other? No!” he said.

Mr. Qureshi said Pakistan never wanted a crisis and was ready to cooperate with India. “We said share evidence with us; we said we are willing to cooperate; we said let’s sit and talk. That’s the only sensible way forward. Two neighbours, two atomic powers, can they afford going to war? Suicidal!”

Asked whether Prime Minister Narendra Modi has sent any message to Pakistan, Mr. Qureshi said he did not. “We have made the overtures but he seems under a lot of domestic pressure, he seems in a very tight position.”

Mr. Qureshi also cast doubt on the Jaish-e-Mohammad’s role in the February 14 Pulwama attack that killed at least 40 CRPF soldiers. “We are not sure of that… They [the Jaish] have not [claimed responsibility]… There is confusion on that. The confusion is that the leadership, when contacted, said no.”

Asked who contacted the Jaish leadership, the Minister said: “By people over here who are known to them. They deny that [attack]. That’s the confusion…they claimed no responsibility. What I am saying is there is confusion, there are conflicting reports on it.”

Regarding the anti-India militant groups, Mr. Qureshi said: “We have proscribed the JuD [Jamaat-ud-Dawah], and the so-called nerve centre of the Jaish-e-Mohammad at Bahawalpur has been taken over by the Punjab government.”

Asked about India’s February 26 air strikes, he said there was a madrasa in Jaba Top in Balakot, which “the world and Indians have been talking about as a training camp.” “Now the media were taken there and what did they see is in front of you. India claims that they have hit three terrorist camps. Where are they? They claimed that they killed 350 terrorists. Where are the bodies?”

Mr. Qureshi added that the government of Imran Khan would not allow “Pakistani soil to be used by any group, any organisation for terrorist activity against anyone, including India. That’s our policy. What I am saying is I don’t want to go in the past. At this stage, we want to de-escalate.”

As for Jaish chief Masood Azhar, Mr. Qureshi said: “We are willing to listen to any reasonable proposal. Now we have courts in this country, and the courts are independent. When you take action against an individual, no matter who he is, you will have to prove your point in the court of law. What we are saying to the Indians: if you have something, please share it with us. And if you do, we can articulate a case in court and we can justify action against that individual and that organisation to the people of Pakistan.”

On the dossier India has sent, he said: “It was received and we are studying the dossier… If India wants to initiate a dialogue based on this dossier, we are willing to engage with them.”

A 24-year-old woman was killed on Tuesday in heavy shelling by the Pakistan Army, targeting villages along the Line of Control (LoC) in Jammu and Kashmir’s Poonch district, officials said. Shameema Akhtar, a resident of Noona-Bandi, was killed in the Pakistani shelling in the Shahpur sector, Poonch District Development Commissioner Rahul Yadav told PTI. He […]

Hassan Deputy Commissioner R. Girish has instructed the officers of National Highway Authority of India to start the work on improvement of the stretch of NH 75 between Hassan by-pass and Maranahalli near Sakleshpur at the earliest. The roadwork has been stopped for several months, forcing locals to stage protests demanding the early completion of […]

Four pedestrians fatally knocked down by speeding car in Thrissur

A speeding car fatally knocked down four pedestrians, belonging to two families, at Kottanellur near Thrissur early on Tuesday. The deceased were Subran, 54, his daughter Prajitha, 29, Babu, 52, and his son Vipin, 29. One person was critically injured in the accident. The speeding car rammed into a group of people, who were returning […]