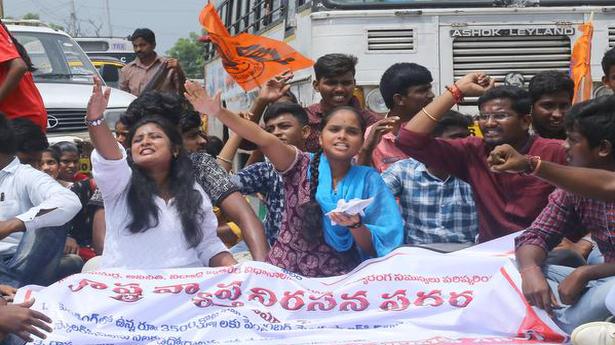 A large number of ABVP members from the undivided Warangal under the leadership of district convener Punnam Venu staged a protest at Mulugu Cross Road. Addressing the gathering, Mr Venu said the pending scholarships amount to ₹305 crore and demanded that the scholarship be increased to ₹2,000 per month from the current ₹1,500. Chief minister K. Chandrasekhar Rao had also promised one lakh jobs during his election campaign but is yet to deliver, Mr. Venu said.

In Jangaon district, State ABVP secretary Ambala Kiran accused the TRS government of being indifferent to the issues pertaining to students and educational institutions. “It has failed to fill even a single vacancy since it came to power in 2014,” he said.

Stating that the TRS had ignored the very concept of the separate Telangana movement – ‘Neellu, Nidhulu and Niyamakalu’ (water, funds and employment), Mr. Kiran urged the government to issue notification for filling of vacant posts in the State.

The Commander-in-Chief of Myanmar Defence Services who is currently visiting India should be brought to justice for his role behind the genocide of the Rohingya, a leading member of the ruling coalition of Bangladesh has stated. Hasanul Haq Inu, a member of the Sheikh Hasina-led ruling combine in Dhaka, said that Senior General Min Aung […]

Travel by RTC can be rewarding

The Nalgonda region of the Telangana State Road Transport Corporation (TSRTC), one of the largest in the State, has taken up distribution of surprise gifts to deliver a message. Making a concerted attempt to get passengers to return to patronise the public transport service especially during the pandemic situation, TSRTC-Nalgonda has decided to give away […]