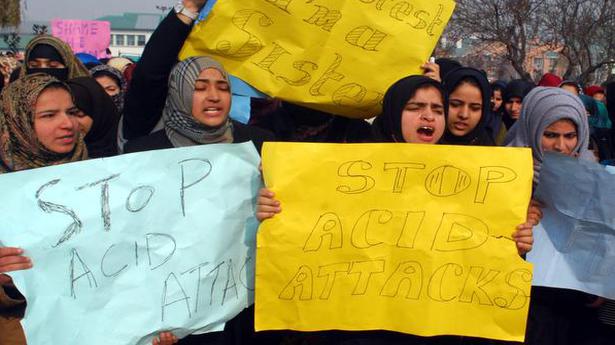 Acid attacks are “uncivilised and heartless crimes”, the perpetrators of which do not deserve any clemency, the Supreme Court said on Monday.

“A crime of this nature does not deserve any kind of clemency. This court cannot be oblivious of the situation that the victim must have suffered an emotional distress which cannot be compensated either by sentencing the accused or by grant of any compensation,” a Bench of Justices A.M. Khanwilkar and Ajay Rastogi observed in a judgment.

The Bench ordered two men, who have already suffered a five-year imprisonment for throwing acid on a 19-year-old girl, to pay her ₹1.5 lakh compensation each.

The apex court was deciding an appeal filed by the Himachal Pradesh government against a March 2018 judgment of the State high court, which reduced their 10-year jail term by half.

The victim was attacked while on her way to college in July 2004. They came on a two-wheeler and threw acid at her. She suffered 16% burns. The court said it must have been the “darkest day of her life”.

The apex court further directed the State to pay compensation to the girl under the victim compensation scheme and deposit the same before the trial court within three months.

The Supreme Court had, in April 2015 in the Laxmi case, passed several far-reaching directions, some of which include making the private health industry responsible for providing mandatory and free care to acid attack victims. The court had also made private hospitals across the country liable to provide full and free medical treatment to victims. The term ‘treatment’ included reconstructive surgery, free medicines, bed, rehabilitation and aftercare.

The court had directed State governments to take action in cases of private hospitals turning away victims.

The Supreme Court had further mandated all States to fix ₹3 lakh as minimum compensation for victims. It had directed the Home and Health Ministries, and the National Legal Services Authority to take up the issue with the State governments.

Noting that adequate publicity should be given to the Acid Attacks Victims Compensation Scheme, the court had directed that district judges should appoint committees comprising the local Magistrate, district police chief and Chief Medical Officer to deal with complaints of victims about compensation.

Second round of fire safety audit in Kochi

The Fire and Rescue Services Department has launched the second phase of its inspection at high-rises in Ernakulam that figure under the category of ‘high fire risk’ apartments. The fire safety preparedness in over 900 high-rises identified under the category will be reviewed. Senior officials associated with the process said that the department would recommend […]

India will set up an electronic platform to help member countries of the South Asian Association for Regional Cooperation (SAARC) fight the COVID-19 pandemic. The decision was conveyed to health professionals of the SAARC countries during a video conference on Thursday which was conducted as decided during the March 15 virtual summit of SAARC leaders. […]

Bidar on the north-eastern edge of Karnataka borders Telangana and Maharashtra and was one of the places that saw the movement for separate religion status for Lingayat gather steam. The issue, however, is not a talking point in this Lok Sabha elections here. Two key candidates — Karnataka Pradesh Congress Committee working president Eshwar Khandre, […]