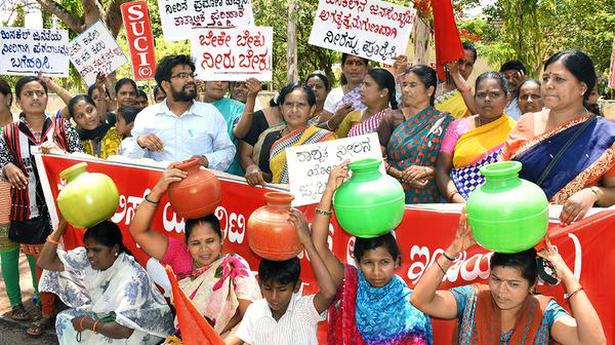 Activists of the Social Unity Centre of India (SUCI) staged a demonstration at Hinkal on Friday to draw the attention of the authorities to the drinking water scarcity in the Hinkal Gram Panchayat limits.

Nearly 35,000 people live in the Hinkal Gram Panchayat limits and it lacked permanent drinking water facility though it was on the outskirts of Mysuru city.

The activists, led by SUCI leader M. Umadevi, said the problem stemmed from lack of adequate linkages to ensure proper and equitable distribution of water being supplied to Mysuru which receives water from both the Kabini and the Cauvery.

Villages falling under Hinkal Gram Panchayat limits require atleast 3 million litres of water per day at the rate of 85 Litres Per Capita Daily and urged the government to fulfil the basic demands of the people of the region. There are 28 borewells in the vicinity, but 25 of them have dried up and has accentuated the water scarcity, according to SUCI.

It also took exception to the information provided by the officials at a review meeting held in Mysuru recently where it was announced that ‘there was no drinking water scarcity in Mysuru’. The SUCI alleged that it was a false information provided to higher authorities and demanded the multi-village drinking water scheme exclusively for Hinkal to cope with the recurring crisis.

The Parliamentary Standing Committee on Railways has expressed serious concern about the Ministry’s lack of effort to address the panel’s reservations over the maintenance protocol for bridges that are more than a century old and its emphasis on the need to re-evaluate the classification of railway bridges so as to augment their safety and security. […]

The Enforcement Directorate (ED) on July 31 questioned former Jammu and Kashmir Chief Minister Farooq Abdullah in connection with a money laundering case involving the State cricket association funds. His statement is being recorded in the ED’s Chandigarh office, said a senior agency official. The ED probe is based on an FIR registered by the […]