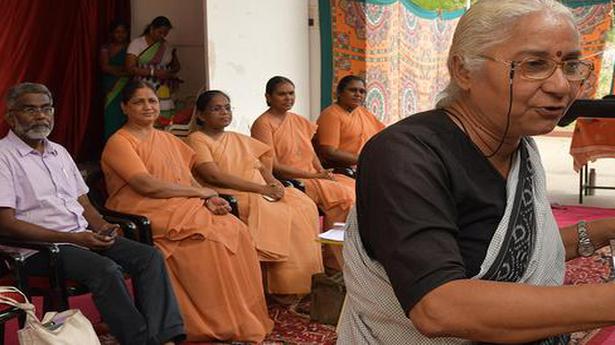 Social activist and leader of the National Alliance of People’s Movements (NAPM) Medha Patkar on Saturday urged the Tamil Nadu government to respond to non-violent protests against the implementation of “projects of destruction” such as hydrocarbon exploration through dialogue.

The people of Tamil Nadu, who had given an “anti-incumbency vote” in the recent election, were still not satisfied with the official response to issues and the “crisis of survival” that they had been highlighting for a long time. Farmers, fisherfolk, labourers, unorganised workers and Dalits had been ‘screaming’ as their livelihood had been affected, she said. “In this situation, a struggle is on to protect their livelihood. The issue is how the State is responding to the struggle. But, in Tamil Nadu, much wrong has been done by the government,” she said while addressing a press conference here on Saturday.

“It is a serious situation where the people and the State are divided. The State is duty-bound to respond to the non-violent protests. The real issues have to be addressed through dialogue with people. Common public hearings have to be held as per law and to ensure justice. It has to be a non-violent way of response and not [one] taking to lathis and bullets,” she said.

Pointing to the hydrocarbon exploration in the delta and the proposed drilling of wells, Ms. Patkar alleged that the Tamil Nadu government was supporting Vedanta again, as it did in the Sterlite issue. The drilling of wells cannot proceed without cumulative environmental impact assessment. The project has to be viewed in terms of the “ecological devastation” it would cause and the impact [it would have] on the livelihood of the people and farmers, she said.

Noting that NAPM had already raised the hydrocarbon exploration issue in many national fora, Ms. Patkar said MPs who had positions on these issues should now plead the case of Tamil Nadu in the Lok Sabha.

She alleged that the disappearance of activist Mugilan after he addressed a press conference on the Sterlite issue was nothing but kidnapping.

“We demand that Mugilan be produced before the court. We respect the judiciary and that’s the only channel left. The judiciary must protect the people by taking a stand against the violence of the State,” she said.

Justice Sharad Arvind Bobde was on Tuesday appointed as the 47th Chief Justice of India, sources in the government said. Justice Bobde, 63, will take oath as the CJI on November 18, a day after incumbent Ranjan Gogoi demits office. He will have a tenure of 17 months and would demit office on April 23, […]

Former Congress leader and three-time MLA Rosamma Chacko died here on Thursday following age-related ailments. She was 93. Ms. Chacko, a former All India Congress Committee (AICC) member, was elected to the Kerala Assembly from Idukki, Chalakudy, and Manalur constituencies in the years 1987, 1991, and 1996 respectively. Born to C. Chacko and Mariyamma Chacko […]

The Ministry of Heavy Industries and Public Enterprises has a total of 595 electric buses for Tamil Nadu under the Faster Adoption and Manufacturing of Electric Vehicles (FAME) India scheme. Though the allotment of electric buses for Chennai city was yet to be announced, the officials of the State Transport Department point out around 300 […]