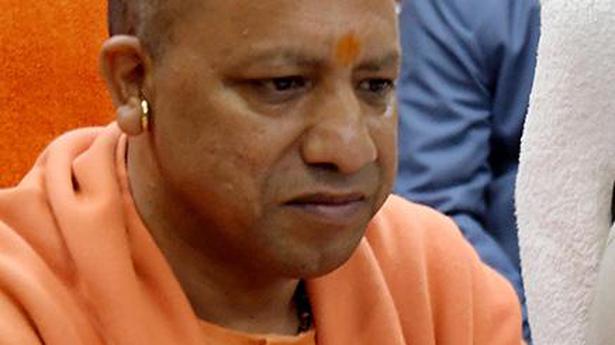 Uttar Pradesh Chief Minister Yogi Adityanath on Friday handed out land documents to 281 persons in Sonbhadra district, two months after 11 tribals of a local village were killed over a long-standing land dispute.

Mr. Adityanath allotted the lease of 852 bighas of land to the beneficiaries at a function in Umbha village, where a village head and his associates opened fired at the villagers on July 17.

Taking a dig at Congress general secretary Priyanka Gandhi Vadra, who had raised the issue of the killings and sought to blame the State government, Mr. Adityanath said he wanted to “ask the Congress ki shehzadi (princess)” if she would apologise to the poor in Sonbhadra for the “injustice” suffered by its tribals under various Congress governments since 1952.

Faced with heavy criticism over the Umbha incident, the State’s BJP government has sought to pin the blame on previous Congress administrations.

“Will she [Ms. Vadra] seek punishment for those who looted the rights of the poor,” Mr. Adityanath asked in Umbha, where he initiated 35 projects worth ₹340 crore.

By distributing the land leases to locals, the BJP government was restoring their rights that were snatched away during Congress party rule, he asserted. This was his second visit to the affected village since July 17, as the BJP looks to contain political fallout from the incident.

Mr. Adityanath alleged that more than 1 lakh bighas of land were grabbed in just Sonbhadra and Mirzapur districts during the rule of the SP, BSP and Congress. An SIT probing the matter would submit its report to the government soon, the chief minister said, promising that nobody would be spared.

A new tehsil would be formed in Sonbhadra, while a police post and Kasturba Girls School would also be established in Umbha village, Mr. Adityanath said.

A solar mini drinking water project worth ₹23.5 crore was also initiated in the village, while 292 families would be provided houses under the Mukhyamantri Awaas Yojana.

Suspected terrorists hurled a grenade on CRPF personnel in Kawdara locality here on Saturday, resulting in injuries to a 16-year-old boy, police said. However, there was no injury to any CRPF personnel as the grenade missed the intended target and exploded on the roadside, a police official said. He said unidentified terrorists lobbed the grenade […]

Data | How do States fare on reporting COVID-19 data?